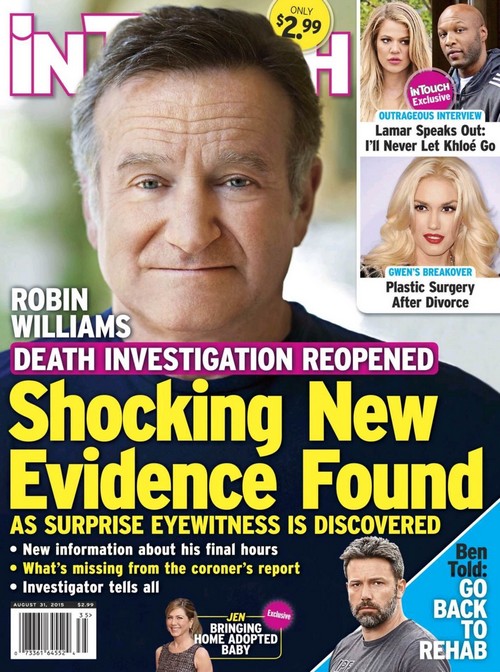 One year after the untimely and tragic passing of Robin Williams, the funniest man to ever grace this Earth, the investigation into his death has been reopened. There is information missing from the initial corner’s report and a surprise eyewitness has been found.

According to a report from In Touch magazine, there is new information about his final hours and two investigators are spilling all. The evidence presented in the initial report is graphic and shocking and pointed to suicide. But now, with the case about Robin’s death reopened, and two investigators assigned to it, there is evidence pointing to foul play and not suicide.

One private investigator, who requested anonymity, has visited Robin’s home, the one he shared with his wife of three years, Susan Schneider, says that he has been to the home in Tilburn, California on several occasions. “It’s a fascinating but tragic story and I will continue to look into it,” the private investigator promised. The second private investigator, a former police chief named Sue Dietrich Nance, believes there is much more evidence that has not been revealed about Robin Williams’ death and that there is much, much more to the story. Is his widow Susan Schneider at the root of covering up evidence?

Even though the press reported that Robin’s assistant found him hanging, there was a mystery man in the house that morning, in addition to the comedian’s massage therapist. Evidence that he was there has been almost completed redacted from the corner’s initial report. Who is this mystery man and why was he there that morning? Reportedly this witness was a man with whom Robin had entrusted very valuable personal jewelry and wristwatches. Was Robin Williams going to sell these items or was he hiding them from Susan Schneider? There has been speculation that the couple was in the beginning stages of filing for divorce.

What happened the night Robin took his own life? Did he take his own life? Did Susan and this man know something more about his death? The fact that items were redacted from the initial corner’s report certainly could point to foul play. But why? What reason would Susan have to aid in covering up the cause of Robin’s death? According to the second private investigator on Williams’ reopened death investigation, Sue Dietrich Norton, “Everybody believes there is nothing more to the story, but I believe there is.” And who better than a former police chief?

The investigation is still unfolding so be prepared for more details to emerge about Robin’s death. There are many people who were shocked – beyond shocked – that a man who could make the whole world laugh so hard their sides would literally split, would take his own life. Though he was suffering from depression and had recently been diagnosed with Parkinson’s disease, Robin had battled depression – and addiction – before. There seems to be no reason that he wouldn’t keep battling to the very end.

What do you think CDLers? Is there is more to the story regarding Robin’s death? Or do you think the legendary comic took his own life and we should let him rest in peace?