Rose McGowan Dumped By Agent After Blasting Adam Sandler’s Sexist Script Notes – Brushes It Off, Won’t Be Fired From Own Mind! 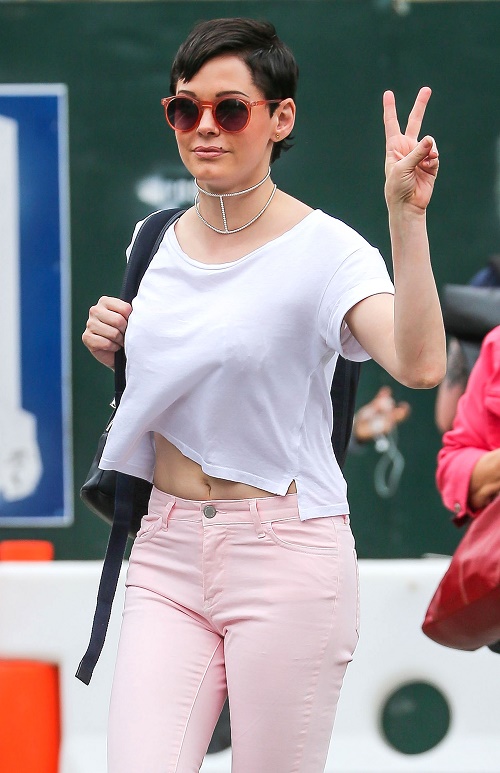 Rose McGowan called out Adam Sandler after a photo surfaced of Sandler appearing at a photo call for the upcoming film Transylvania 2, wearing a t-shirt and sweat pants, while his co-star Selena Gomez, was completely decked out in a red two piece set.

Rose McGowan tweeted out a photo of a casting call notice she received that read, “please make sure to read the attached script before coming in so you understand the context of the scenes. Wardrobe note: Black form fitting tank that shows off cleavage. And formfitting leggings or jeans. Nothing white.” McGowan then added her own comments and said, “Casting note that came w/script I got today. For real. name of male star rhymes with Madam Panhandler hahahaha I die.”

Now, McGowan has just revealed, on Twitter once again, that her tweet has caused her agent to drop her. She writes, “I just got fired by my wussy acting agent because I spoke up about the bulls**t in Hollywood. Hahaha #douchebags #awesome #bringit.” Then she wrote, “The awesome thing about being an artist? You can’t be fired from your own mind. #freedom.”

Something tells us that McGowan is not too upset about her agent dumping her. Earlier this week the star spoke with Gawker and revealed that she only wants to keep people on her team that agree with and understand her vision. If her agent wanted to drop her of a comment she made, then McGowan is probably better off without that agent.

In the interview with Gawker she said, “A lot of agents aren’t supportive of their talent in any way. Nobody’s understood how to represent me, which is why, other than film publicist, I currently have no representation other than my lawyer. I don’t need it.”

We think it’s absurd that McGowan’s acting agent would drop her over one comment that she tweeted, but hey, that’s how the industry can be sometimes. What do you think? Was her agent right in letting her go for calling out industry heavy hitter Adam Sandler, or is her team overreacting? Let us know in the comments below.