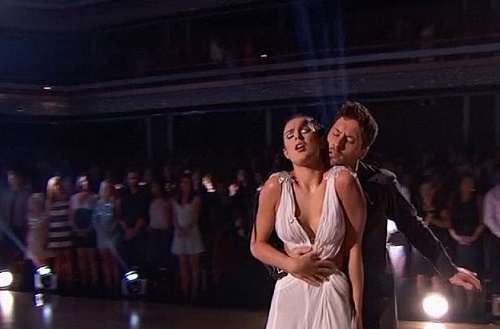 Rumer Willis and Val Chmerkovskiy have been super hot on Season 20 of Dancing With The Stars – but their Fifty Shades of Grey dance rose some eyebrows. Their ridiculously hot Fifty Shades of Grey inspired routine on Monday, May 11 will easily go down in DWTS history. Rumer and Val have been at the center of dating rumors and speculation since Season 20 began, and waltzing across the dance floor pretending to be Christian Grey and Anna Steele hasn’t exactly helped their argument that their relationship is strictly platonic. It’s no secret that Val Chmerkovskiy likes to flirt with his partners and create illusions of a romantic relationship to create buzz and bring in more votes – but this time he may have gone too far.

Although the judges raved about Rumer Willis and Val Chmerkovskiy’s Fifty Shades of Grey dance – Dancing With The Stars fans at home were a little perturbed by the performance. Anyone who has read the Fifty Shades of Grey books or seen the movie starring Jamie Dornan knows all about the erotic S&M inspired love story. But, for two people who are not dating, it’s a little over the top for them to perform a dance based on the movie. Sure, Rumer and Val kept it rated PG for the most part, but just the theme is enough to make some people squeamish.

It would be different if Val and Rumer were actually dating, but they have vehemently denied any romantic involvement with each other. So fans are finally starting to see that the two partners are simply playing up their showmance for votes. Also, you have to keep in mind that Dancing With The Stars is a wholesome family-oriented show, and most families don’t enjoy sitting down and watching S&M inspired dance routines with their kids. So that could also lose some votes for Rumer and Val.

What did you think of Rumer and Val’s Fifty Shades of Grey dance? Was it too hot for TV – this isn’t the first time that Rumer has been accused of being “too raunchy.” Is faking a romantic relationship actually going to cost Rumer and Val votes, because DWTS fans are tired of the team trying to manipulate them for votes? Let us know what you think in the comments below!