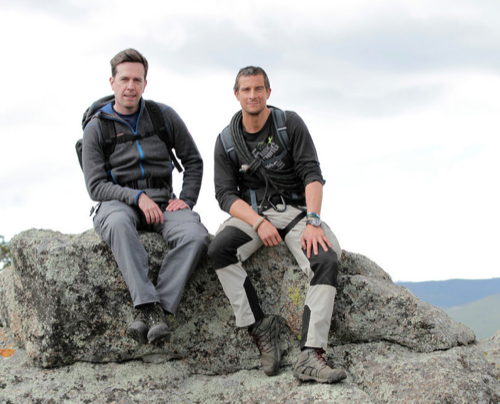 Tonight on NBC their new show RUNNING WITH BEAR GRYLLS airs with an all new Monday August 3, season 2 episode 4 called, “Ed Helms” We’ve got your recap down below. On tonight’s episode Ed Helms joins Bear in the mountains of Colorado, where Ed confronts his fear of heights and feasts on an unusual dinner.

On the last episode Bear Grylls took Oscar-winning actress Kate Winslet on the ride of her life as they “paramotor” to the top of the Snowdonia Mountains in Wales. They descended through jagged, rocky cliffs and ascend up deep canyons to get to their destination on the coast. They gathered trout and earth worms and had to set up camp in the very windy environment to rest before their final swim in the icy ocean waves. Along the way, Kate talked humorously about her humble upbringing and also revealed the unwavering determination that had helped her achieve movie star status. Did you watch the last episode? If you missed it, we have a full and detailed recap right here for you.

On tonight’s episode per the NBC synopsis “Funnyman Ed Helms (“Vacation”) pushes himself to the limit when he joins Bear Grylls high atop the Colorado Mountains. Admittedly fearful of heights, Helms comes face to face with sheer cliffs, crumbling rock and mountain-top perches where the bottom is nowhere in sight. As Bear puts him through the paces with a cringe-worthy dinner menu, Helms manages to conquer his limitations and discover a new side of himself. He also opens up about the trials and tribulations that lead him into a career in comedy.”

Will Running with Bear Grylls be another huge hit for NBC? Well you’ll have to tune in tonight at 8PM EST and let us know what you think. We’ll be recapping all of the action right here for you. Hit up the comments and let us know your thoughts about this new show!

#RunningWild tonight featured Ed Helms, star of the new Vacation move, with Bear Grylls. The Hangover star waits for Bear in Colorado. He says he’s excited but terrified and is crapping in his adventure pants and says it’s a good thing they’re reversible. Bear is in a helicopter heading to meet up with Ed who is busy showing off his gear. He has a harness and is worried about cliffs. Ed hears the chopper and says his heart is beating now.

He waves at Bear who comes over with a rope and gets Ed into his harness then asks how he is with heights. Bear straps them together then straps the chopper rope to them. The chopper lifts off and lifts them. Ed whoops and says it’s incredible as they fly hundreds of feet up. The helo is dropping them off at a ridge. It drops them off and flies away. Ed says it’s one of the coolest things he’s ever done and Bear has him look over the edge. They are way up high.

Bear says this is the worst place to be if you’re scared of heights and says the extraction point is 12 miles away and they’re at 9,000 feet above sea level. Ed is worried about getting down and says he doesn’t see how it will happen. They work down over rocks and then some crumbles. Bear says it’s getting steeper so they’re going to move across to look for a better path. Bear says they have to go faster and tosses down a rope. Ed says it’s instant death.

Bear goes first on the rappel then tells Ed how to follow him. A bird craps on Ed as he’s worrying about the drop. Ed says he’s scared as Bear makes it down to the bottom and tells him to come on. Ed is hanging onto a tree and says he can’t do it. He lets go of the tree then steps back and takes a deep breath. He’s doing it even though he’s scared. Bear calls up to encourage him. Bear coaches him as he goes and Ed gets more confident.

He laughs as he makes it down to Bear. Ed says it was incredible and says he’s overwhelmed and can’t believe he did that. He says he was so scared and now is so emotional. They take a water break and have a snack and Bear asks Ed if he was always funny as a kid. Ed says he was shy as a kid and says there are two stereotypes of comedians – crazy people and dark brooders. He says he’s tried to get away from cynical comedy and a cynical point of view and says life opens up when you do that.

He says he tries to give the world the benefit of the doubt. Bear asks what people approach him about and he says people recognize him but they don’t know why. He says or they see someone taking a picture and ask what his deal is. Bear says they have to move. Bear spots a route down. Bear has Ed on a short rope but he’s not confident that Bear could stop his fall so he’s scared. They move on and Ed says he could use a sandwich. They get down off the cliff face and move towards the treeline.

Bear says they need to find food and shelter and says he’s hoping for a squirrel. Bear says this time of year, it’s slim pickings. Ed talks about finding wild asparagus. They find a spot for a campsite and Ed says it’s gorgeous. Bear says they need to make shelter. They make a wigwam type of thing and Ed says he made one with a blanket and toilet plunger as a kid. They start piling on insulation outside. Ed says it’s amazing and is a fill on wilderness mansion.

Bear says the food thing is an issue and tells Ed to make it nice and try and light a fire while he hunts. He tells him how to start it while he goes to hunt up food. Ed says he hopes Bear comes back with cheeseburgers. He sneezes and says he’s allergic to cats so there’s probably a cougar circling them. Bear searches some little burrows looking for varmints. Bear spots some squirrels and carves a quick spear. Ed gets the fire started and is very excited and says he’s unstoppable in the wilderness. He says they just need whiskey – which they have because he brought some.

Bear calls for Ed and tells him to come over here. He wants Ed to guard the other side of the burrow. Ed trots off to see what he wants. Bear says to keep his hand to keep him from coming out. Ed is grossed out – Bear stabbed a squirrel. He hands it to Ed who is horrified but says the fire is great and he just hopes it hasn’t spread. Ed says this is very Lord of the Flies. He says he’s squeamish and isn’t comfortable catching and killing an animal.

Bear has him gut the squirrel. Bear tells him he’s done well then asks how school was. Ed says he was reasonably well-liked but had a lot of insecurities. Bear says he was bullied and is part of why he took up karate. He says school can be tough. Ed says when he was 14, he had open heart surgery and says he had a bad heart murmur that would have killed him by 25. Bear says that’s traumatic and Ed says it has shaped his world view in some ways.

Ed says he’s excited to be a dad at some point. He tells Bear the squirrel is not bad. Ed pulls out a harmonica and plays it. Later, Bear says Ed nodded off to sleep and then he pulls out some chocolate to snack on. Then Ed says Bear is finally asleep and he drinks from his whiskey flask. Bear talks about waking up cuddling him. Ed says sleeping next to him was unexpectedly romantic since Bear spooned him. He says it was cold so he doesn’t mind.

They pack up to leave. They work their way down through some cramped boulders and have to take off their backpacks to squeeze through. Bear cuts his hands and then pees on them to sterilize them. Ed says Bear just wants to pee on his hands and then says he’ll smear feces on his. Bear says urine has all sorts of uses. They reach a peak and they can see the vehicle they’ll drive up and now have to get down. Bear set up a crazy steep zipline to get down. Ed asks if this is Pirates of the Caribbean.

Bear says he’ll tie him to it and lower him. Bear tells him he doesn’t want to mess up and fall and Ed freaks out a bit. Bear sends their packs down first so Ed can see how it goes. The pack slides down and then hits a rock. Ed is hoping for a softer landing. Bear sends Ed first so he can control his descent so long as Ed doesn’t fall off. Ed says he doesn’t know if he trusts himself to do this. He starts sliding backwards down the rope. Ed makes it to the end then flips off of it.

Ed says he’s badder ass than he thought he was. Ed says a real badass might not agree. Then it’s Bear’s turn and he skids down the rope. Ed says it’s fun to hang out with Bear and says he’s a good guy. Ed says these are insane activities. He says it’s like Boy Scouts for adult idiots. Bear says he wants to go have a drinking challenge and Ed says if it’s yak pee, Bear can win. They hop into a dune buggy and zoom out of there. Bear says Ed has embraced getting out of his comfort zone.

They take it through a creek and get covered in mud and head out. Ed says he’s proud of what he did and says he’s lucky to have gotten to do this.