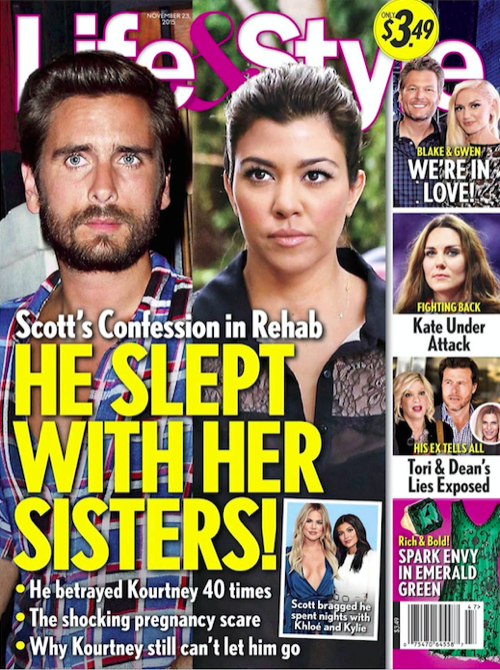 Scott Disick confessed to cheating on Kourtney Kardashian and having sex with both of her sisters – Kylie Jenner and Khloe Kardashian, according to this week’s cover of Life & Style Magazine. Rumors have popped up on more than one occasion that Scott has hooked up with all of Kourtney’s sisters at one point or another, except for Kim. And, apparently it was Scott himself who started them!

Disick is currently in rehab, where he checked himself in post Lamar Odom overdose. This is the longest that Disick has every stayed in one rehab facility, and according to his fellow substance abusers – he has been singing like a canary at the treatment center and bragging about all of his past transgressions to anyone who will listen.

According to Life & Style’s insiders, Scott Disick has bragged about having sex with both Khloe Kardashian and Kylie Jenner behind Kourtney’s back. Apparently, Scott told his pals that he and Kylie had a drunken night of hot sex in early 2015. And, in 2014 Scott bragged that he had sex with Khloe in a Hamptons Hotel shower.

Now that Scott is in rehab, his sponsor is urging him to come clean to Kourtney, about everything, so that he can close that chapter and finally move on with his life. L&S Magazine’s insider dished, “For his treatment to be successful, Scott has to confess all betrayals. Scott needs to tell Kourtney everything, it’s the only way for him to move on. Scott’s sponsors want him to come clean.” But, is there really anything for him to “come clean” about?

We have no doubt that Scott might have bragged to people during one of his binges that he slept with half of Kourtney’s family – but we’re not buying it. Scott Disick is a total narcissist, he probably would cheat with one of Kourt’s sisters if he had the chance – but would Khloe or Kourtney REALLY hook up with Scott? They have saw this man so drunk that he was vomiting and drooling on himself, there is nothing attractive about that. They could have their pick of some of the hottest celebs and athletes in Hollywood – they are not going to hop in to bed (or in to the shower) with their sister’s sloppy baby-daddy.

What do you guys think? Is there any chance Scott really hooked up with Kourtney’s sisters? Do you think that he made the stories up just to try and score some cool points? Share your theories in the comments below!