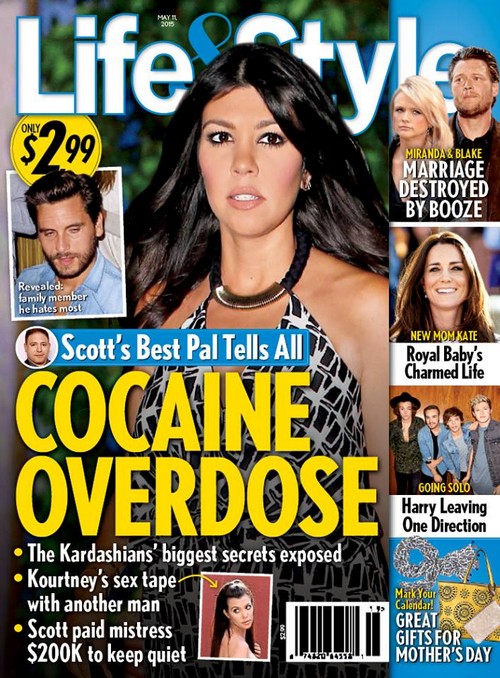 Scott Disick and Kourtney Kardashian have been having issues for the past year, largely due to Scott’s drug and alcohol abuse. In fact, the latest cover issue of Life & Style Magazine alleges that Scott actually had a cocaine overdose, with Scott’s ‘best pal’ spilling the beans to the magazine. And if that’s not enough? In addition to his drug usage, alleged cocaine overdose, and his non-stop partying, Scott apparently paid his mistress $200,000 to keep quiet.

But wait, just in case you think Kourtney is innocent in this. The same report claims that Kourtney Kardashian has a sex tape with another man! Oh, the Kardashians. Drugs, sex tapes, and cheating has become such a regular part of their vocabulary that none of this is even remotely shocking.

In addition to Scott Disick’s and Kourtney Kardashian’s never-ending relationship problems [and their impending break up], Life & Style’s cover issue claims that Miranda Lambert and Blake Shelton are getting a divorce after their ‘marriage was destroyed by booze‘. Apparently, Miranda simply couldn’t put up with Blake’s drinking, partying, and alleged cheating any longer.

Plus, Harry Styles is reportedly planning to leave One Direction and pursue a solo career, just weeks after Zayn Malik rocked the music world by making the same decision. But trust me, One Direction cannot survive without Harry Styles – so if he leaves, the band can pretty much close shop, because they’ll be kaput.

Then, of course, there’s Kate Middleton and her fancy royal baby. When that baby finally gets here, she’s going to be treated with garlands and roses and mass celebrations, and she’s going to have no idea what’s going on. Well, she is a baby so that’s understood, but her parents will probably whisk her off to Anmer Hall the first chance they get, to ‘protect’ her from the media [a.k.a. so they don’t have to work or deal with the rest of the royals at Kensington palace].