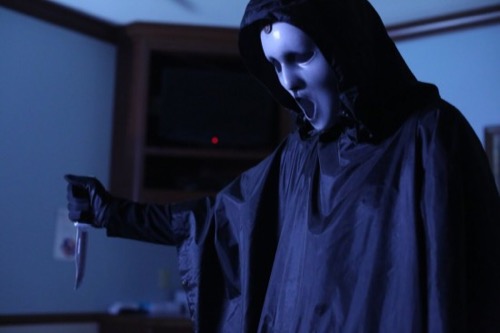 Tonight on MTV Scream airs with an all new Tuesday August 25, season 1 episode 9 called, “The Dance,” and we have your weekly recap below. On tonight’s episode, Emma, (Willa Fitzgerald) who doubts that the actual killer has been captured.

On the last episode, Emma was shaken by another death; and uncovered a secret from the past. Did you watch the last episode? If you missed last week’s episode we have a full and detailed recap, right here for you.

On tonight’s episode per the MTV synopsis “Emma, who doubts that the actual killer has been captured, teams with Piper to find answers at the Halloween dance.”

With Seth Branson in custody, the police wanted to assure the people of Lakewood that they’re safe now that the killer had finally been caught.

But, in their attempt to do this, Piper the blogger feels like they’re taking way too many risks. Especially with the lives of the kids they are supposed to be protecting. So Piper later took the first opportunity she could to corner the sheriff. And she then proceeded to question him about his somewhat rash decisions following Branson’s arrest.

First she wanted to know why the police had allowed the High School Halloween dance to carry on as if nothing is happening. Because they could dress however way they like but throwing a “memorial” in the victims’ honor was still going to draw out a killer. And the only safeguard they seem to have put in place was to tell parents and kids beforehand not to wear masks wile trick or treating.

And, well, that doesn’t feel like they’re actually doing anything.

Piper believes the dance will be the perfect place for the killer to make its next move. And, with sheriff ignoring her, Piper felt like Emma was only other person she could turn to. Emma being after all at the heart of these crimes.

Plus, even Piper figured out, the killer took close notice of Emma and her family from the very beginning. So Piper invited Emma along as she went to go question her best lead thus far – Brandon’s mother. The mother had apparently relocated not far from town meaning it was easy to reach her.

Yet talking to her on the hand proved to be difficult. The older woman was a little bit fuzzy on the past and she mistook Emma for her mother. Thus the ladies were able to get their information but who knows how reliable that woman was when she said her grandson stopped by and told her his name was Seth.

That could have been a memory or either of the ladies could have wrongfully led her to that conclusion. But, at the time, Emma wanted to believe the older woman was telling her the truth and she simply wanted to put the whole mess with the killer behind her.

And that’s why she decided to go to the dance.

However, Emma had been a little too quick to rejoice. The sheriff ended up having his own doubts about whether or not he had caught the right guy. And he was forced to check something out on his own just to see if he could verify Branson’s whereabouts before the man’s lawyers noticed they could get him off technicality.

So all that served to do was get the sheriff attacked. And confirm that the killer was in fact still out there.

Though soon everyone else was coming to that conclusion as well. Noah and Audrey had found some of Rachel’s old footage and they wanted to look through it to see if they spotted Branson up to something. And what they found was a video feed of Nina and Kieran. Which is odd because officially Kieran hadn’t arrived in town long enough to have ever met Nina.

Realistically, Kieran had always skated the edges of being a suspect but that video was a definite red flag.

Kieran had arrived in town just as the killings began. He once showed at the scene of crime oddly at the same as the police. And he appears to have a thing for Emma. So killing Will that way would obviously be because he was jealous of the idea of Will and Emma getting back together.

But Noah didn’t want to think Kieran was guilty. Not when Kieran once saved his life. So he told Audrey she was being paranoid and that she had nothing to worry about. Kieran was going to be at the party with everyone else and it doesn’t seem like he would kill someone when he’s completely surrounded.

At least that was Noah’s reasoning. Though Audrey still had her suspicions and felt it was only right to tell Emma about them.

Only, Emma felt the case was closed. She had made excuses for Audrey when it was Audrey that was caught on camera looking incriminating. And she said that there must be a reason for that night with Nina.

And Kieran did have an explanation. He said he had gotten into fight with his dad and that he met Nina at a bar. But nothing happened. He said he drove her home when she noticed she was too drunk to do it herself and that was it.

So he told Emma she could either believe him or not. But he wasn’t going to stick around and keep getting accused of something.

And Kieran had already been gone by time Piper finally showed up at the dance. So he didn’t know that Piper had gone back to Brandon’s mother and showed the woman pictures of the vigil for the victims. Or that the woman said Kieran was her grandson – not Seth.

Also Kieran wasn’t there when footage of his captured father started to play at the dance.

Yet, while he’s a great suspect, it should be noted that Branson broke out of his cell.