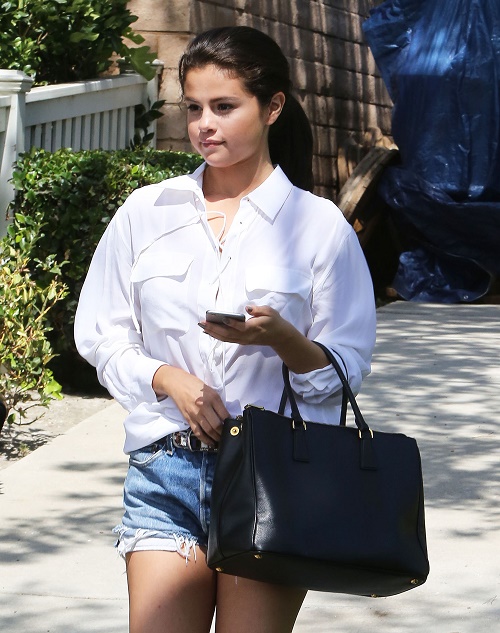 Selena Gomez has been a spending an awful lot of time with her ex-boyfriend Justin Bieber, but somehow she managed to find time to sneak off to some late night hook-ups with Orlando Bloom at his mansion. Dating rumors have been plaguing Selena Gomez and Justin Bieber for months – ever since they were spotted getting cozy poolside. Biebs might finally be ready to settle down with SelGo, but she is really enjoying playing the field, and playing Justin. Karma really is a bitch.

According to a new report from In Touch Magazine, Selena and Justin were officially back together as of July 11. But what Justin didn’t know is that Selena was cheating on him Orlando Bloom. Can anyone really blame Selena though? What girl in her right mind would want to dump Justin Bieber or Orlando Bloom? Selena has transformed into a total player – and we are loving every minute of it!

In Touch Magazine’s inside source dished, “Selena has quietly been seeing both of them. She was freaking out when the details of her day came out because she didn’t want Justin to know about Orlando, or vice-versa. She really thought she was keeping it all a secret but now everyone knows – including the guys!”

You have to admit it really is a little ironic and almost perfect that two of the biggest players in Hollywood – are getting totally played. We have no pity for Justin Bieber, he deserves everything he gets after years of cheating on Selena Gomez. It sounds like he is finally getting a taste of his own medicine, and now he knows what it feels like to be publicly cheated on.

If you were in Selena Gomez’s shoes – would you choose Orlando Bloom or Justin Bieber? Do you think that she is cheating on Justin as payback for everything he did while they were together? Let us know what you think in the comments below!