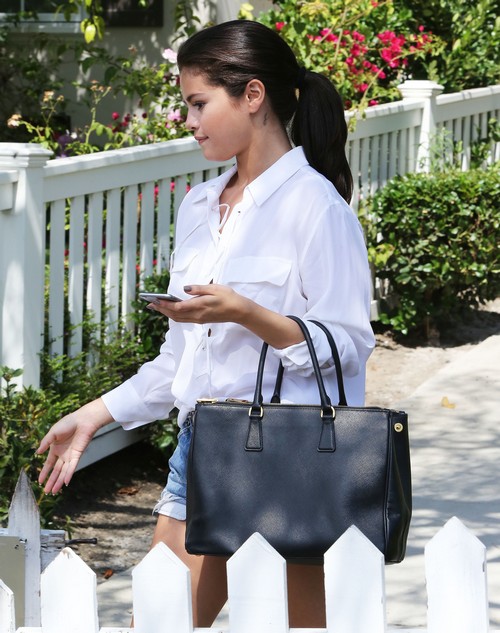 Selena Gomez does not want to date her ex-boyfriend Justin Bieber, and has zero intention of taking him back – no matter how hard he tries prove that he has turned over a new leaf, or professes his love for her in music videos. Selena has made it pretty clear she is loving the single life by dating more guys in one month than we care to keep track of, but Jelena fans went in to an Internet frenzy this week when photos surfaced of Selena Gomez and Justin Bieber hanging out poolside and appearing very cozy together.

People Magazine is now reporting what CDL has been saying for weeks, Selena Gomez wouldn’t take Justin Bieber back if he was the last man on earth. After Justin and Selena’s PDA-filled pool session, one of People Magazine’s sources set the record straight – they are definitely not dating. The insider explained, “She has no interest in dating him. There is nothing going on romantically at all. That is probably the first time they have seen each other in a while.”

Justin Bieber has made it very clear he wants Selena back, if she doesn’t feel the same way then why does she keep hanging out with him and leading him on? Word on the internet is that it is all a revenge ploy to hurt Biebs like he hurt her in the past, during their rocky three year relationship. Other fans seem to think that Selena is just using Justin to promote her new album. And, if that is her plan – then she is executing it beautifully. What better way to stay in the headlines and create a buzz for yourself than to hang out with your ex-boyfriend Justin Bieber?

What do you guys think, will Selena and Justin ever get back together? Is she just leading him on? Or using him to promote her new album? Share your thoughts and theories in the comments below!