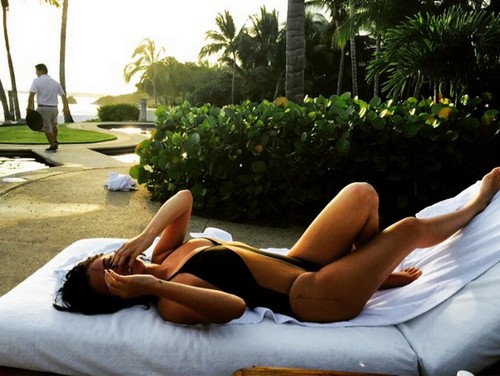 Selena Gomez has been flaunting her hot bikini body for first lover, Justin Bieber. Selena Gomez’s on-again, off-again relationship with Justin Bieber may have ended for the moment, but that doesn’t mean that they’re going to stop playing games with each other. Even though Selena purports to be very happy dating Zedd right now – and Justin keeps posting intimate Instagram pictures with Kendall Jenner – it doesn’t seem like the two are completely over each other. Selena Gomez loves Justin Bieber and always will.

Exhibit A: Selena Gomez accidentally-on-purpose posing for the paparazzi in a barely-there pink bikini on the beach in Mexico. Sure, you could argue that she didn’t know the paparazzi were there, but she’s Selena Gomez – by now, she should know that the paparazzi are ALWAYS there. It’s pretty much a given that if she’s in a public place, the paparazzi will also be there – and they will most definitely be photographing her.

Plus, wearing a tiny bikini and prancing around on the beach is a surefire way to make her ex-boyfriend jealous, no? It could also be a direct retaliation to Justin’s latest social media posts, which have all revolved around Coachella and Kendall Jenner. Even though Justin and Kendall publicly claim that there’s nothing going on between them, I think it’s become increasingly clear that there is something going on there – even if it’s just a friends with benefit relationship.

Of course, Justin posting that picture to Instagram was very strategic, and I’m sure he knew that Selena would look at it. However, what he wouldn’t know is that she would soon get back at him by posing on a beach in a bikini, hoping against hope that the paparazzi manage to capture some good shots of her having fun – and thereby making him jealous.

It’s what all of us plebeians might do, but we’d use Facebook and Instagram to do it – and Justin and Selena just have the paparazzi to do it for them.