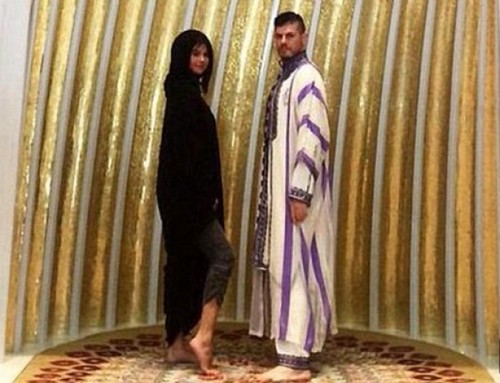 If Selena Gomez had any question about whether or not ex Justin Bieber was sitting at home alone pining for her after seeing her Instagram pics of her Dubai girls trip, she need only check his Instagram to find the answer. Justin Bieber happily posted pics of he and rumored girlfriend model Hailey Baldwin as they rang in the new year with a major hookup in Turks and Caicos and looking very cozy together.

Hailey Baldwin, daughter of actor Stephen Baldwin, has been seen nonstop over the past few weeks with Justin Bieber and it is driving Selena Gomez mad with jealousy. Selena can’t believe that Justin and Hailey would hookup so blatantly. Despite Selena’s efforts to look carefree and happy after her split with Bieber, she is brokenhearted over the split and is devastated over the fact that her ex is already moving on. Making matters worse, Selena’s head is swirling as she wonders why she couldn’t hold on to Justin, why she wasn’t “good enough” for him. Towards the end, Justin told her that he simply wanted to be alone and thought they should split to take time for themselves and to regroup. He said he didn’t want a commitment. So for Selena to see Justin already moving on and spending all of his time with Hailey is crushing her.

Now her low self-esteem just fell even lower and she keeps comparing herself to the model that stole Justin’s heart. Finding out that the two vacationed together while she was with her girlfriends instead of a man has been eating her up, and she’s fuming over the fact that Justin and Hailey spent the new year together. It was always a significant time for Justin and Selena as they’d take about their dreams for the coming year. Knowing he was doing that with Hailey has completely crushed Selena and it’s hitting her that Justin may have truly moved on this time. Justin even tweeted “2015. New beginnings,” perhaps as a sign this truly is a new beginning for him as he pursues Hailey.

That’s not all! Justin also spent time with Hailey’s friends and family in Turks and Caicos as well, bonding with those most important to his new gal pal. Hailey’s older sister, Alaia Baldwin was along for the trip and has already given her seal of approval on the relationship. Justin was working overtime trying to make a good impression on Hailey’s friends and family, at one point even ripping off his shirt as he joined in a game of soccer.

Could it be that the Justin Bieber-Selena Gomez saga is actually over? Maybe so, and that could have sent Selena into a tailspin…which could explain Selena’s lack of judgment when visiting a Mosque in Dubai on her trip. Selena posted pics of her smiling with her girlfriends, and another of her showing off her bare ankle and part of her leg—both are big DON’Ts at the mosque. Selena pulled the pics after getting backlash from her followers, but we have them below.  One thing is for sure, she is likely going to want to stay in Dubai… the US may be too small for Selena, Justin, and Hailey.

CDLers…do you think Selena and Justin are over for good this time?