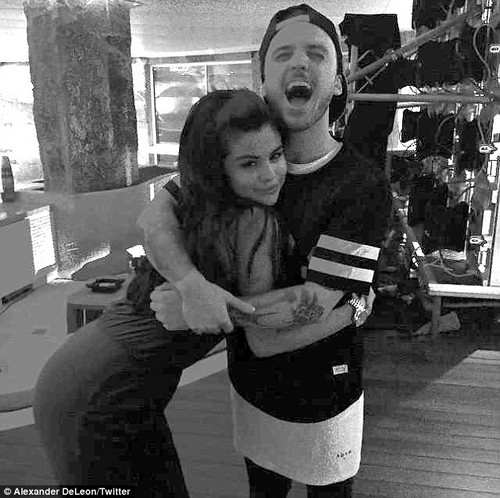 Selena Gomez has stooped to cheating with Josephine Skriver’s boyfriend Alexander DeLeon in Dubai to make Justin Bieber Jealous and pay him back for hooking up with Hailey Baldwin. Selena Gomez has sure made an effort to share her New Year’s Dubai trip with all of her fans, ensuring them that she is carefree and having a wonderful time with all her new friends from the modeling world. Selena Gomez posting pics of her laying on the sand, showing lots of skin with frenemy GiGi Hadid, videos of how she eats in Dubai where she happens to be planted between a group of men, and carefully making note of the gentleman/bodyguard Alexander DeLeon – whom she has been accused of cozying up to in the past – fans might think she is simply trying to share her joy with them. Those who know better (aka…our CDLers) know that Selena has one person in particular she is hoping to get the message to… ex Justin Bieber.

Quite eerily, as Justin Bieber has set his sights on model Hailey Baldwin, Selena Gomez has now become entrenched in the world of modeling—befriending and hanging with a models-only crowd that includes GiGi Hadid, Kendall Jenner, and Josephine Skriver—who happens to be dating musician Alexander DeLeon. Selena posted a group shot that included Alexander where she called him out as a “the best ever, gentleman/bodyguard” who happens to be the “absolute best way to end [her] year.” Kind of an odd thing to say about a your friend’s boyfriend… though maybe not if you are Selena Gomez and you are trying to make your ex jealous. On Monday, Selena was pictured embracing the giddy The Cab singer as the two seemed quite happy in the Instagram shot.

In between rolling in the sand with her new friends, and partying in Dubai, the ever-hypocrital Selena took the time to post a pic of herself gazing out the window with the caption, “Philippians 3:14.” For those of you whoe are biblically-challenged, the verse goes something like, “I press on toward the goal to win the prize for which God has called me heavenward in Christ Jesus.”

Clearly Selena is trying to send a message to ex Justin Bieber in their usual game of tit-for-tat after Justin’s recent dates with Hailey Baldwin. Perhaps Selena’s former friend Demi Lovato was hoping to send her a message for the new year tweeting, “I decided to focus on bettering myself by making changes in my life with health, balance, endurance and consistency. You don’t have to wait till the beginning of a new year to make resolutions for yourself. It’s all about loving and taking care of the only body you will ever have… Cherish it, love it, embrace it.. Because when you do.. It begins to show.” The two former besties and Disney stars famously ended their friendship after a newly sober Demi Lovato had just about enough of Selena’s addictions… all of them.

So, will Selena steal her friend’s man, just to have someone to call “boyfriend?” Does she really think she’s fooling anyone? We know better CDLers! Tell us what you think below.