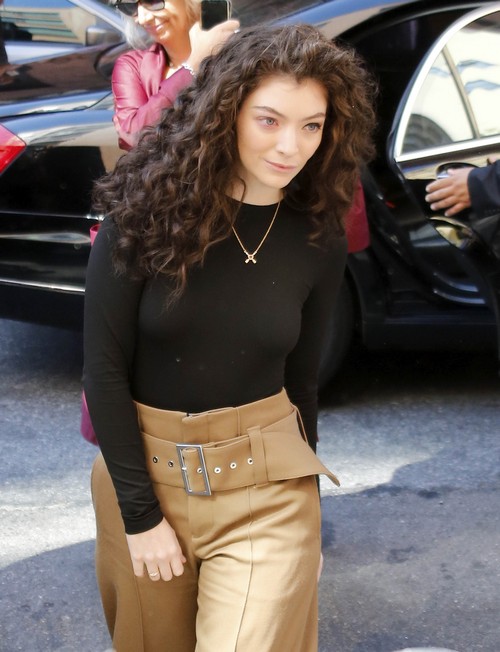 Selena Gomez has some bad blood with fellow singer Lorde. Taylor Swift’s BFF’s seem to be feuding, which is ironic because they are supposed to be helping Taylor feud with her enemies (cough, Katy Perry), not feuding with each other. Lorde is probably one of the most down-to-earth gal pals in Taylor squad of famous girls, it’s hard to imagine what she could have done to step on Selena’s toes. Regardless, a new report insists that Lorde and Selena are fighting.

This week’s September 28 edition of OK! Magazine reveals that there was an awkward moment between Selena Gomez and Lorde at a Video Music Awards after party last month – and tons of people witnessed it! An eyewitness at the VMA party dished to OK! Magazine, “When Tay greeted Lorde warmly at a VMA after party, Selena gave the “Kiwi” singer the scariest death stare.” The insider goes on to say that the reason Selena was so cold to Lorde is based on pure jealousy. The source added, “Lorde wrote her own musical success, Selena can’t write or produce on her own.”

So, can we expect some super immature music videos about each other to come out of the Lorde and Selena Gomez feud. Most likely not. We were really interested in seeing Lorde and Selena throw shade at each other, but according to OK! Magazine’s inside source, Lorde has “no interest in feuding with Selena because she doesn’t think she is a real musician.” Ouch.

Selena Gomez tends to pick fights with anyone she feels intimidated by or feels insecure around, that has been her MO in Hollywood for years – so it’s really no surprise that she has an issue with Lorde, or any other female singer as amazing as Lorde. What do you guys think? Is Selena just being jealous, or is this whole “feud” being exaggerated a bit? Share your thoughts and theories in the comments below!