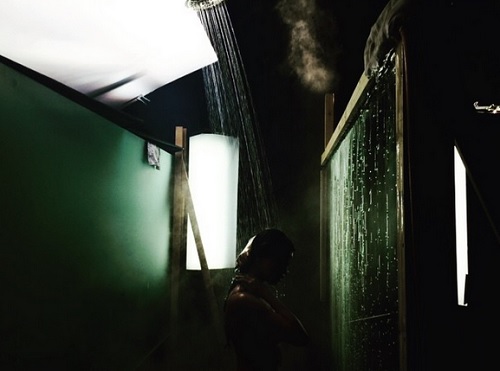 Selena Gomez and Justin Bieber’s relationship status remains a mystery, are they getting back together or not getting back together? Who knows! But they have definitely been hanging out. A video of them partying with a group of friends was leaked on SnapChat, and they are rumored to be hooking up with some sort of “No Strings Attached” arrangement. Selena Gomez revealed a few months ago that she was working on her new album and it would be “darker” than her previous work, and some of it was inspired by her tumultuous relationship with Justin Bieber over the course of the last three years.

Selena Gomez took to Instagram on Tuesday, June 9 to post a nearly nude picture of herself in the shower, from what appears to be the set of a new music video she is working on. Selena has been posting some pretty sexy pictures on social media lately, but it looks like this one could actually be a shot from a new music video because you can see set lights and flood lights around her. Selena captioned the photo, “Ready…#itscomingsoon.”

As of right now we really don’t know much about the album that Selena Gomez is working on, except that it was inspired by her messy love life with Biebs and won’t be as happy and peppy as some of her previous tunes. Of course, Justin Bieber is reportedly working on some songs of his own about Selena – and the couple are even rumored to be working on a Christian music duet for Hillsong Church. Selena was just recently under fire for faking her entire relationship to Zedd to promote their song “I Want you To Know,” so we can’t help but wonder if the reason she began hanging out with Justin again was more for publicity and just a clever way to promote her new album.

What do you think of the sexy shower picture Selena uploaded on Instagram? Do you think that the video she is working on could be about Justin Bieber? What do you think about the rumors that she faked dating Zedd just to sell their single? Let us know what you think in the comments below!