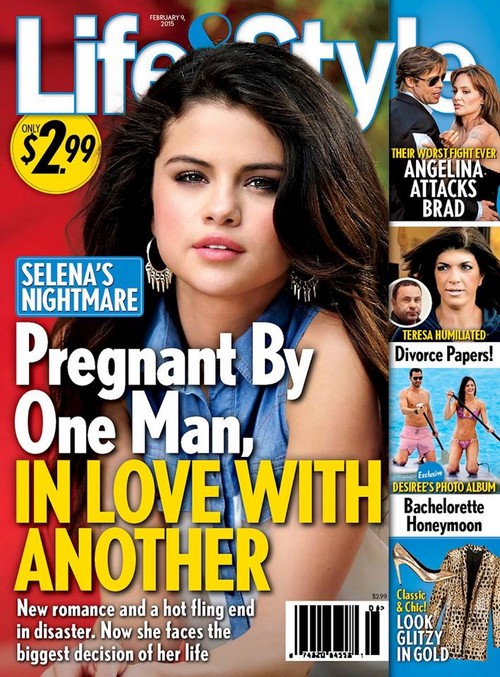 This Selena Gomez – Justin Bieber – Zedd love triangle is turning increasingly more interesting, especially since Selena is rumored to be pregnant with Zedd’s baby. Whattt, you ask? According to the new cover issue of Life & Style Magazine, Selena is pregnant with Zedd’s baby and she’s mainly freaking out about it because it would affect her relationship with Zedd, and also affect her future with Justin Bieber.

The way Life & Style describes it is, ‘Pregnant with one man’s baby, in love with another!’ Ah, so dramatic. Life & Style’s ‘sources’ add, “Weeks into her relationship with producer DJ Zedd, Selena is convinced she’s expecting his baby — and terrified of what it could mean for the recent rekindling of her troubled love with Justin Bieber. She thinks she could be pregnant since she has gained so much weight lately and hasn’t been feeling well. She thought she had the flu at first, but she also isn’t the best at taking birth control, so she is majorly stressing.”

Well, celebrities like Selena Gomez have all the whole world at their disposal so I doubt that their birth control options are so limited. But at the same time, birth control medicine does have a way of mimicking the early stages of pregnancy, including over-eating, drastic weight gain, and mood swings.

Plus, if Selena was pregnant with Zedd’s baby, it would be more obvious to other people other than just tabloids. I mean, it’s Selena Gomez we’re talking about, no?

What do you guys think? Is Selena pregnant with Zedd’s baby, and even if she is, does that mean Justin Bieber will never take her back in the future? And if Selena and Justin have broken up for good, is that cause for consternation or celebration? Seriously, who would ever pick Justin over Zedd, amirite?