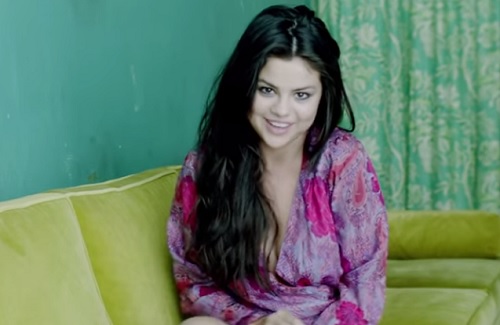 Selena Gomez might not be dating Justin Bieber anymore, but she wants Biebs to know what he is missing out on! It looks like Justin may have made a huge mistake letting Selena go – because the new and improved Miss Gomez is HOT. Last week, Selena dropped hew new single “Good For You,” featuring A$AP Rocky and it began soaring up the charts.

It’s the first song from her new album, which is still untitled, however is set to be released in late 2015. On Friday, June 26 Selena Gomez’s official music video for the song “Good For You” hit the internet, and it is almost NSFW. Seriously, Wizards of Waverly Place will never be the same after you see the former Disney star writhing around on a couch nearly naked. The video also features an intense topless shower scene and a solo wet T-shirt contest.

Selena Gomez confessed in recent interviews that her relationship with Justin Bieber did inspire some of the songs on her album – and by “inspire” she seems to mean that she wanted to rub Justin’s face in what he was missing out on. We’re sure it is only a matter of time before Biebs reaches out to Selena after seeing her super sexy music video. Sources close to Selena say that she is completely over Justin Bieber, and has no intention of giving Biebs the time of day after he recently began dating Hailey Baldwin again – while he was hooking up with Selena on the side.

An insider dished to CDL, “Selena Gomez really is a new and improved version of herself. Her confidence is soaring, and there is nothing Justin can do to get her back. She knows her worth now, and she is done with Justin’s games.” Do you think that Selena and Justin are really done this time? What do you think of her new “Good For You” music video? Let us know in the comments below!