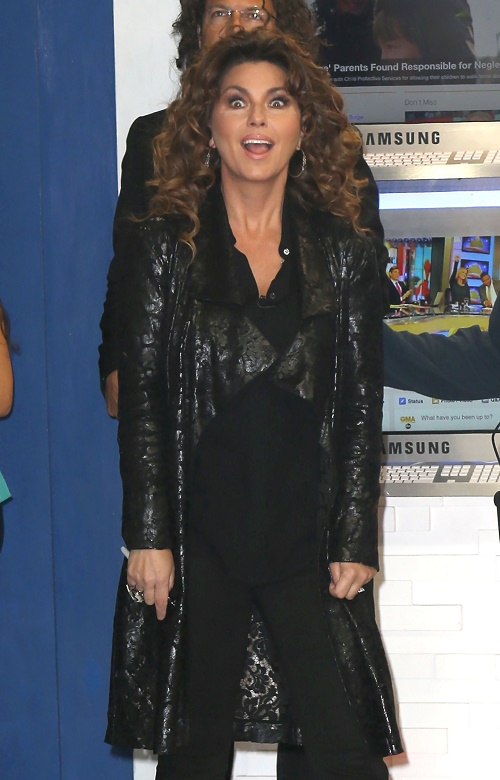 Shania Twain just announced her farewell tour on Wednesday, and it will be titled ‘Rock This Country’. 48-year-old Shania Twain still has an extremely passionate fan base that will no doubt be devastated to see her retire, but at the same time, should turn out in full force to say good-bye. This also marks Shania’s first North American tour in more than 11 years, which isn’t much of a surprise – Shania’s largely stayed away from touring as she’s gotten older.

Shania Twain first announced the news on Good Morning America, admitting that the tour was, “an after-party to all of these years.This is a very, very important time on the road for me. I just feel like I’m ready to hang my hat up in that regard. I just really want to go out with a bang.”

The tour will reportedly kick off in Seattle on June 5th, and go across the United States before ending in Canada, Shania Twain’s home country. Then, it will come back down to the US again, or more specifically, Fresno, California on August 23rd, days before Shania turns 50 years old.

In a statement, Shania Twain announced, “This is a celebration tour. It’s party time! The ‘Rock This Country’ tour will have a different spirit than my past tours. It’s a Shania they’ve never seen before. A lot of years have gone by and I’ve got a lot more to share.”

For those who haven’t been following Shania Twain, she’s spent the last two years doing a Las Vegas residency called ‘Shania: Still The One’. Of course, she hasn’t technically announced her retirement yet, but if she’s doing a farewell tour, I can’t imagine that it will be that far behind.

What do you guys think about Shania Twain’s farewell tour? Do you think that she’ll go out with a bang, or will she continue doing shows here and there until she officially ‘retires’? Let us know your thoughts in the comments below.