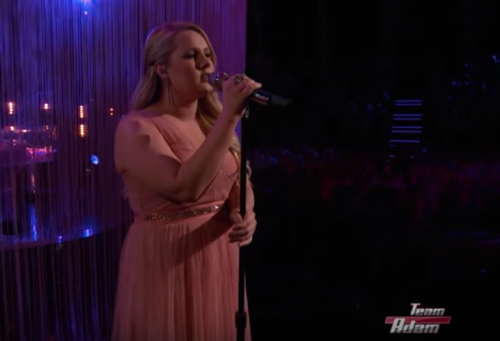 Shelby Brown has been voted off The Voice. “The Voice” fans have voted online and via iTunes downloads and Team Adam’s Shelby Brown is going home without the prize. On the semi-finals performance show on Monday, December 7, Shelby sang Even God Must Get the Blues by Joe Dee Messina.

The 17-year-old Alabama country crooner was one of three artists Adam Levine brought to the semi-finals. In the blind auditions, Shelby sang Grace Potter’s “Stars” and turned all four judge’s chairs within moments of taking the stage.

So it’s a shock to many that Shelby Brown has now been eliminated from The Voice. Perhaps Shelby would have fared better under Coach Blake Shelton than Adam Levine, but Adam did get her all the way to the semi-finals. Perhaps it’s song choice that saw Shelby Brown voted off The Voice.

Even God Must Get the Blues is a good song, but is not necessarily recognizable to a wide audience. One thing is for sure – Shelby has grown under Adam’s tutelage, but did she listen to her coach enough? Adam pointed out on the semi-finals that she can be difficult to work with and she said the same of him.

So did Adam try to guide her to a more popular song for the semi-finals showdown and she ignored his advice? Or was Adam 100% on-board with the selection. Adam came into the semi-finals with high hopes carrying three artists along.

Shelby Brown, Amy Vachal and Jordan Smith, all from Team Adam, made it to the semi-finals and now Shelby Brown has been voted off The Voice and will pack her back to go home. On the plus side, Shelby’s performances have been so strong that being eliminated from The Voice should not hurt her career.

The powerhouse singer is just 17 and has already made a critical contact in the world of country music working with Blake Shelton – even if he wasn’t her Voice coach.  No more singing karaoke at the bowling alley for this Alabama teen – we’re sad to see Shelby go but no doubt she’s got an incredible career ahead of her!