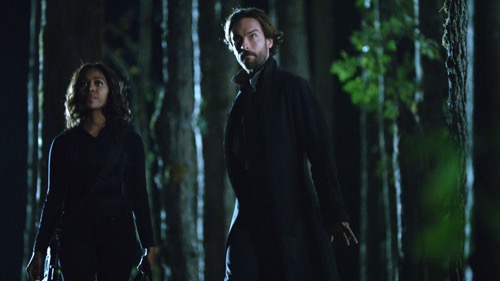 On the last episode, Reynolds went to Washington, D.C., in connection with the Nevins case, so Abbie was left in charge, but her career could be undone by the fallout from the theft of the Shard by Jenny and Joe. Did you watch the last episode? If you missed it, we have a full and detailed recap right here for you.

On tonight’s episode per the FOX synopsis “Abbie’s in trouble with Reynolds following Jenny and Joe’s encounter with Sophie. Meanwhile, the Witnesses deal with the implications of the Shard.”

Tonight’s episode of “Sleepy Hollow” kicks off with Pandora, she is in some sort of fiery world and talking to a zombie that he refers to as her “love.” Pandora has Jenny, she is lying on the ground, she promises the zombie that he will be able to live through Jenny and she will be his “vessel.”

At the police station, Reynolds has Nevins in the interrogation room – but Nevins is not cooperating an refuses to answer any questions. Reynolds is furious that Jenny and Abbie got in the way of his undercover investigation. He wants to know everything that Abbie knows. Abbie says that she doesn’t know anything, but her sister Jennie does, and right now Jennie is missing and that is way more important than Nevins. Abbie storms out and meets up with Crane and Joe to look for Jenny.

Meanwhile, in the woods Pandora is doing some sort of chant – Jenny is floating in the air. The zombie is sucking Jenny’s power out of her so that he will be strong enough for him and Pandora to take over the world, and “bend their will.” Pandora warns him that he has to take Jenny’s power slowly, or else the vessel will give out. Jenny wakes up, she demands to know where she is. The zombie holds a sword over her head and says that the “eye lies within her.” Jenny lets out a scream – Abbie, Crane, and Joe her cries for help. They arrive at the location but Pandora and Jenny are already gone. All they find is smoke and a map in a different language. Crane looks at the paper and is shocked he says that they aren’t chasing a monster this time, they are chasing a “living breathing God.”

They head back to the archives and Crane gets to work trying to decipher the clue that Pandora left behind. It says “May the hidden one remain forever unseen. Pray his eye does not fall upon you.” Crane warns Abbie and Joe that they can’t rush in to battle against, “Etu Ilu” – he has a gem that represents his absolute power, it’s called the “all seeing eye,” and that is what is trapped inside of Jenny (the schard).

Crane recollects that Jenny was experiencing visions brought on by the eye before she disappeared. The prophet says that if someone brings him the all seeing eye – he will be whole again and remake the world the way that he seems fit. Crane realizes that the all seeing eye is related to the Masonry, and Benjamin Franklin was once trying to bring back the eye. There is a grand masonry book being held at a university in Albany – Crane thinks that book will have the answers they need to know how to defeat “Etu Ilu.”

They head to the college, and arrive in the middle of a summer solstice party – there are drunk students running around in togas and vomiting left and right. Crane leads them inside the frat house to find the hidden book – a fight breaks out between Crane and the frat brothers. While the drunk kids in togas are brawling, Crane, Abbie, and Joe sneak upstairs. The book is right where Crane said it would be – inside a hidden room on a pedestal.

Crane cracks open the book – it was written by Paul Revere. The article was wrote in 1776, George Washington used the all-seeing eye of providence to help him win the war. Paul Revere brought Washington an ancient gemstone that was supposed to contain the power of the gods. The power of the eye was absorbed by Paul’s nephew Jonathan, just like what happened to Jenny.

Crane learns that the only way they got the eye out of Jonathan was after the boy died. Paul Revere used a staff to draw the power out of the eye, Washington said the eye was too dangerous –he wanted it stashed away before anyone else got hurt. Crane remembers the magical staff, he saw Paul Revere melting the staff down – he draws a picture of the case that Revere melted the eye down to. Joe remembers the case – it is the same case that they carried the schard in.

Abbie remembers the casing being put in to evidence was Nevins was arrested, she rushes to the police station to try and get the case – they need it to suck the eye back out of Jenny before it kills her or Pandora and Etu have enough power to take over the world.

Abbie sneaks in to the evidence room to steal the casing. Nevins is being loaded in to a van to head to an FBI office to be interrogated. Abbie learns that Nevins wants to speak to her – and only her about the eye and Jenny. She heads to the garage where Nevins was being put in to the van, the cops loading him in the van have been murdered by Pandora – and she took Nevins with her.

Abbie finds Pandora trying to make a run for it in the parking lot, she pulls her gun on Pandora and demands to know where her sister Jenny is. Pandora taunts Abbie, she says that she can tell that Abbie has failed Jenny in the past. Another agent comes running through the parking lot and Pandora vanishes like a ghost.

Reynolds calls Abbie in to his office, he wants to know where Nevins is – he wants answers about what Jenny was doing. Abbie stands up and tries to walk out on Reynolds. He shouts at her that she hasn’t been straight with him since the second arrived in town. Abbie says she can’t give him the answers that he needs and hands him her badge.
Later that night, Reynolds is calling Abbie’s phone and she still isn’t picking up. Foster stops by his office, she has bad news – right before Abbie left the police station, she took a bunch of gear with her, night goggles, vests, and serious guns. Reynolds orders Foster to go find Abbie ASAP.

Meanwhile, Abbie, Crane, and Joe are getting ready to go to war against Pandora and Etu – so that they can save Jenny before it is too late. Pandora and Etu have Jenny lying on a bed, she is not in good shape, Etu is about to take the last of his power out of Jenny. Crane, Abbie, and Joe arrive in the middle of Pandora’s ceremony. She tells Etu to “enjoy his feast,” and heads off to stall Abbie and Crane.

Abbie opens fire on Pandora with a machine gun, and it does no good so Joe starts launching grenades – Crane sneaks up behind Pandora and takes her out with a taser gun. Abbie finds Jenny – she takes out the casing to get the eye out of Jenny, as soon as she opens the case, the eye starts floating out of Abbie. Meanwhile, Crane is reading from a book of spells – Pandora’s box starts floating in the air above him.

Etu wakes up and throws Abbie across the room, Joe comes to her rescue and fires a few more shots at the God. He buys Abbie enough time to get up and finish pulling the eye out of Jenny with the magical case. Suddenly, the ground starts shaking and the roof of the underground lair begins to cave in. Abbie takes the casing and says that it is the only way that she can save Jenny – Crane begs Abbie to stop – but she takes the casing full of power and walks head on in to an explosion. There is a bright flash of light, Crane wakes up on the ground, Joe is a few feet away from him lying on the ground, Jenny is passed out but Crane checks her pulse and she is still alive. Crane races upstairs – but Abbie is gone, she has disappeared.