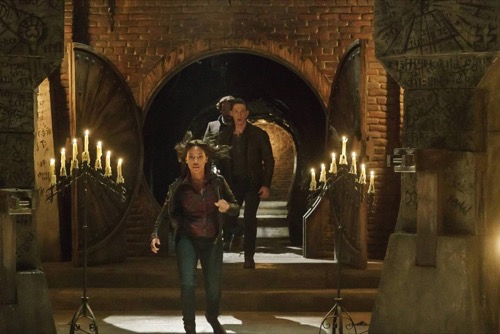 Tonight on FOX their mystery adventure drama SLEEPY HOLLOW continues with an all new Thursday November 12, season 3 episode 7 called “The Art of War,” and we have your recap below. On tonight’s episode, Reynolds (Lance Gross) goes to Washington, D.C., in connection with the Nevins case.

On the last episode, Pandora unleashed a monster that haunts Sleepy Hollow residents at night, which tempted Abbie and Jenny to face a painful chapter of their lives. Meanwhile, Ichabod drew on his own experiences to offer Abbie advice when she had to make an important decision about her career. Did you watch the last episode? If you missed it, we have a full and detailed recap right here for you.

On tonight’s episode per the FOX synopsis “Reynolds goes to Washington, D.C., in connection with the Nevins case, so Abbie is left in charge, but her career could be undone by the fallout from the theft of the Shard by Jenny and Joe.”

Tonight’s Sleepy Hollow Season 3 Episode 7 is going to be exciting, and you won’t want to miss. So be sure to tune in for our live coverage of Sleepy Hollow — tonight at 9PM EST!

Tonight’s episode of “Sleepy Hollow” kicks off with Abbie and Crane at home playing Chess, Abbie reminisces about learning how to play from Corbin. Danny shows up at the door of course Crane acts super odd and rushes to the kitchen. Danny stopped by to tell Abbie that he is headed to Washington for a few days to get an extension on the Nevins case. He gives Abbie his cell phone and asks her to hold down the fort while he is gone.

Meanwhile, Nevins is having a meltdown – he tells his protégé Sophie that he needs the Shard in 96 hours or else he is in serious trouble. Apparently the person that contracted him to get the Shard does not play games, he won’t say who the person is though. Nevins heads down in to Pandora’s cave – he reads a poem aloud to summon the box. The lid opens and the cave fills with gray smoke, and then there is some growling behind him. He spins around and there are three demons standing there – he tells them to “go fetch,” and they run off.

Jennie and Joe are at the gym boxing, they are arguing over Corbin’s Swiss bank account. Jennie doesn’t understand why Joe never went and cashed out the account, she thinks that Corbin might have left some sort of secret message there. Joe doesn’t care and he doesn’t want his dad’s blood money. Jennie begins acting possessed in the boxing rink – her eyes glaze over and her skin turns red for a moment. Joe shakes her and she snaps out of it.

Jenny and Joe meet up with Crane and Abbie – tey fill them in on what happened to her at the gym. Jenny is convinced that it has to do with the Shard, Crane warns her that mortal beings are not meant to contain this much mystical energy, her body obscured the shard and if they don’t get it out of her it could kill her. Meanwhile, the demons that Nevins summoned are busy tracking Jenny through the woods. Joe wants them to go talk to nevins, if anyone knows how to save her – it is him. But, Abbie says it is off the table – she doesn’t want to jeopardize Danny’s case by going after Nevins.

While they are all standing there arguing, the demons come out of the woods – they’re basically bulletproof and are regenerating body parts. The only person who is able to do any semi damage on the demons is Jenny, but even she can’t kill them. Crane, Joe, Jenny, and Abbie make a run for it and hide underground. They realize that the demons were only after Jenny, they think that Nevins and Pandora might be working together, and she helped Nevins summon the demons. They head back to the Archives to do some research on the demons that are after Jenny.

In the archives they learn that the demons chasing after Jenny are called the Norse Berserkers – they have a one track mind and won’t stop until their mission is complete. The Berserkers mission is to obviously capture Jenny. Speaking of Jenny, she’s fading fast – her eyes keep glossing over and she appears to be possessed, a scary male voice keeps taking over. Crane learns that the Berserkers have one weakness, mistletoe. The very same mistletoe that we decorate Christmas trees with and kiss each other under.

In the archives they learn that Berserkers like to hide in dark metal caves – Crane and Joe head to the Sleepy Hollow scrap yard while Abbie babysits Jenny. They are armed with their crossbows and mistletoe and begin snooping around the metal scrap yard looking for the Berserkers. They find a few dead bodies, so they know that they are in the right place. Joe and Crane realize that they are in over their heads and the Berserkers are much stronger this time around – they lock the Berserkers in the warehouse and make a run for it. They head back to the cave and tell Abbie that the mistletoes didn’t work.

Crane tells Abbie that they don’t have a choice – they have to go talk to Nevins and find out everything there is to know about the Berserkers and how to stop them. He warns her that her sister’s life could depend on it. Abbie agrees and tells Crane that he and Joe can go to Nevins’ house – he gives Crane the pick to jimmy the lock on the door.

Crane gets in to a scuffle at Nevins; with Sophie – but he makes it back to the Archives. He briefs Abbie on the creatures that Pandora and Nevins created. Crane says that their only chance to defeat the Berserkers is to get them to defeat each other. They are unbeatable, but they can beat each other. Abbie, Joe, and Crane get to work on the plan. Joe checks in with Jenny in the temple where she is lying in bed – he reassures her that it is all almost over and they have a plan. Joe finally gets up the nerve to kiss Jenny, and she kisses him back!

Crane, Abbie, and Joe are headed home to Jenny – Nevins comes out of nowhere and pulls a gun on them and demands to know where Jenny and the shard is. He has Sophie with him, Joe is prepared to take a bullet before he gives up Jenny’s location. Sophie is apparently in the FBI, she blows her cover and shoots Nevins gun out of his hand. She grumbled that Reynolds is going to flip on her for blowing her cover, all to save Joe. Abbie is shocked – she can’t believe that Reynolds didn’t tell her Sophie was undercover the whole time. They get back to the cave and Jenny is gone …