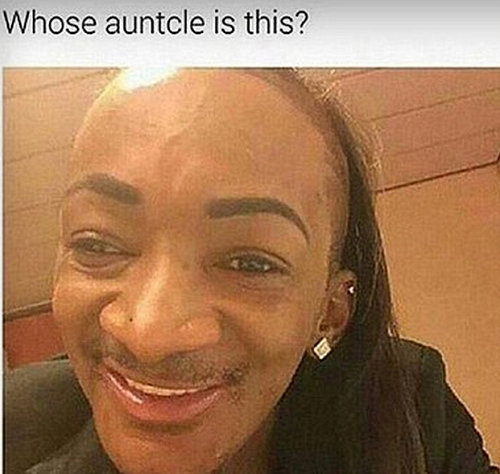 Snoop Dogg posted a photo of Cortez Booze on Instagram, alongside an insensitive comment, and now he’s being held responsible for the gay bashing that’s resulted on the social media network. Snoop Dogg may not like it, but he looks almost identical to a man he bashed online, posting the Cortez Booze’s pic to Instagram with the caption, “Whose auntcle is this?” Cortez was donning makeup, earrings and a weave in the photo—while still maintaining a bit of a mustache. Now, Cortez has become the victim of very hateful comments and slurs.

Cortez reported the situation to the powers that be at Instagram, and reported the picture as inappropriate, but as of now, the photo is still up, and comments are still being posted. Cortez has decided that he needed to take more drastic measures and has hired an attorney to go after Snoop Dogg, whose real name is Calvin Cordozar Broadus.

Snoop didn’t mention any similarity to Cortez , but we’re guessing someone tipped him off to how much the two resemble each other. Mr. Dogg likely took offense to that and decided to bash the poor guy and allow his fans to do the same. Even the names of the two are similar… Calvin Cordozar Broadus, who has named every child of his with the same initials, Corde, Cordell, Cori, and Julian Corrie Broadus. The look-alike’s name is Cortez Booze, which, judging by the last name, may not necessarily be his given last name. In any case, take a look at the two pictures and likely you’ll see the resemblance that has Snoop Dogg mad and embarrassed.

The 42-year-old rapper should know better than to tease someone over their looks just out of common decency. But if common decency was not enough, he may want to think about how Shaquille O’Neil was sued for mocking a man with a rare disorder by way of an Instagram post. Shaq later fought the lawsuit, after admitting to his rude behavior, but denying that his behavior was defamatory. Apparently, Shaq didn’t make any derogatory remarks with the posting, simply captioned, “Smile today.” But there could be an entirely different outcome in Snoop Dogg’s case as he obviously mocked Cortez by calling him “Auntcle.”

Snoop Dogg is certainly no looker, and without his fame would definitely not have a gaggle of ladies adoring him, so what gives? What do you think, CDLers? I want to hear your comments on this situation involving the Cortez Booze Instagram photo — and, please, remember to stay positive and don’t contribute to the hateful remarks that have already been directed against this individual. We’re better than that!