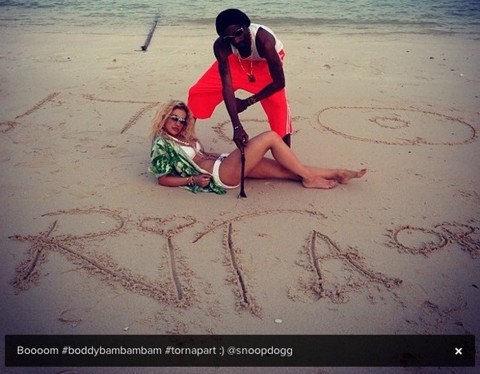 Is Rita Ora secretly having an affair with Snoop Dogg? By the looks of the pictures the singer posted on her Instagram page lying in a white bikini while the rapper draws her name in the sand with a heart-shaped ‘i’, it wouldn’t be far from the truth after all. The RocNation signed artist flew out to Thailand where she met up with the 41-year old, who has been touring in several cities under the name of ‘Snoop Lion’, and though it’s not entirely clear how these two got together, the pictures prove that they have definitely known each other for a while.

Surely, Rita isn’t one of those girls who happens to flash her body to every man she sees, is she? If that’s the case, we have no utter respect for her, considering Snoop has a three children and a wife, Shante Broadus, at home that trust him enough to stay away from girls who are so desperate for any fame-whoring opportunity they can get.

Just last month, Rob Kardashian was venting on Twitter over Rita – who he dated for roughly a year – claiming she had slept with twenty men while carrying his child. I happen to watch Keeping up with the Kardashians, and viewing the show made me realize how sensitive Rob can be, so for him to make allegations like these and not mean every word he said would be very unlike him.

So, if we were to believe everything Rob has been telling his fans, we would say that Rita has definitely got something going on with Snoop Doggy Dogg. Or she’s just trying to gain some kind of public attention to keep herself relevant in the media — either way, it is definitely working for her. Since her break-up from Rob, she has been linked to having an affair with her mentor Jay-Z and actor Jonah Hill.

We don’t know what’s worse; sleeping with dozens of men within a year or get so cozy with a married man who happens to be old enough to be her father. What is wrong with this girl? 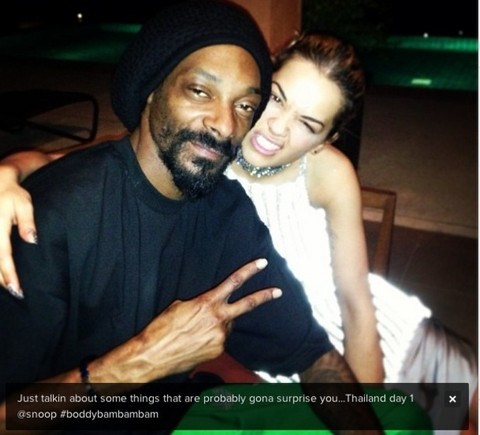