BY Kristine Francis on July 20, 2015 | Comments: 2 comments
Related : Reality TV, Recap, So You Think You Can Dance, Television, TV 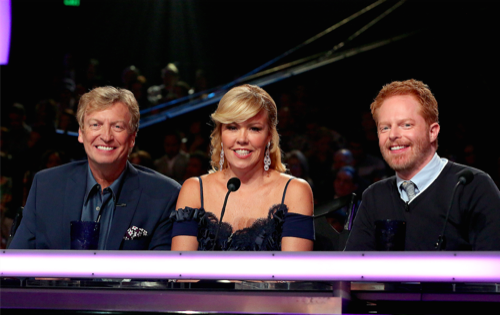 Tonight on FOX, SO YOU THINK YOU CAN DANCE continues with an all new Monday, July 20 season 12 episode 8 called “Top 20 Perform + Elimination”. We’ve got your recap down below. On tonight’s episode the Top 20 dancers perform. Also: the season’s first elimination.

On the last episode, it was the first live show of the season! The Top 20 had been chosen and now it was time for the dancers to show America they had what it took to win. Tune in to watch the Top 20 gave it everything they’ve got, and got to see a special guest performer take the stage. Did you watch the last episode? If you missed it, we have a full and detailed recap right here for you.

On tonight’s show per the FOX synopsis “the first votes of the season are in! Find out which Stage and Street dancers won the hearts of America.”

In case you missed it this year is apparently the year for the show to sweep the award categories. So far they’ve received nominations in makeup, lighting, and several people were individual chosen for recognition. Such as Cat Deely in the Reality Host category and Team Stage Captain Travis as a choreographer.

Thus from this point on, everyone just wanted to showcase their very best. And nothing (and I do mean nothing) was going to get in the way of that.

Captains pushed their teams to go where they’ve never gone before and while that ended up working in some cases – it actually took down some of what I thought would be the strongest competitors this year. For instance, the duo Oskana and Jonathan came up with the first ever salsa trio. And for this dance the captains chose Darion, Hailee, and Yorelis.

Hailee is good on Team Stage and honestly Salsa should have been right up there for her. Yet she made some notable mistakes and at various times was out dancing one of her partners. And again Darion is a great dancer on his own but this time he couldn’t keep up with the girls. For Yorelis also out-danced him as well.

However all three were safe from elimination this week thanks to their much stronger performances from last week!

Although, the next act was up, just weren’t as lucky to. See they didn’t have a leg to stand on like the other group. This week their choreographer Ray had given Ariana and Derek a jazz number and the two came off as stronger competitors thanks to their performances. But, sadly, that still didn’t change what many at home and in the audience saw last week.

So, despite having a better night, both Ariana and Derek found themselves in danger.

Then, in between all the dancing that is, an ad popped up. And I’m right when I call it an ad. Because Degree as in the company that makes deodorant and body cleanse took some time away from the competition to show how much they can detect movement and sweat. And while you may feel the need to try this out at home – ads should really have stayed during the commercial portion!

Anyways, when the focus did return to the dancers, we saw choreographer Dee Caspary show two Street performers how to properly conduct a contemporary dance. And what he did with Virgil, Megz, and Alexia was nothing shorter than phenomenal.

See there were many setbacks and fine tuning during practice. For while Team Street was quick to pick up on the many nuisances, they still had to clean it up in order to hold their own against Alexia. Yet, none of that mattered or even showed the moment they hit the stage.

It was like these three have been dancing together for years. And it was this dance that instantly became the favorites for the judges.

Thankfully, it was revealed afterwards that all three were safe from elimination this week but don’t stop voting. Especially for Virgil. He’s a strong competitor and a crowd favorite but he’s still going to need people to truly believe someone from Team Street can win this whole thing.

And following on the lead Virgil and his friends set, Bollywood choreographer Nakul Dev Mahajan came up with a slapstick dance created just for B1,Edson, Gaby, and Lily. It was energetic and instantly grabbed people’s attention. However the dance itself could have used some work.

Edson is stage trained and was also in fact a cheerleader (so the fast happy go lucky pace of Bollywood should be right up his alley) fell kind of flat in the dance. And because it was so unexpected of him, the judges took notice.

They warned him about that later on and told the rest of the group that they had done them proud. But by time Cat came back to say who was safe and who would be up for elimination, a decision had already been made. And it was Lily that was left in the danger.

Though no one had as much of a challenge as Spencer Liff. For it was Spencer that had Asaf on his team and he was the one left dealing with a dancer that constantly tried to do his own thing during practice. So eventually Twitch had to step in.

Especially as it looked like Asaf needed to be reminded that he wasn’t at the competition to showcase his own moves. He was there to dance whatever dance he was told to. And instead of getting frustrated with that, he was advised to get out his own head in order for everyone to move on.

And luckily the advice served him and his team very well in the end.

Asaf, Kate, and Neptune did a jazz number and it was light-hearted sort of dance. Yes, it was entertaining but it didn’t actually demand anything strenuous from its performers. Nor it was emotional based dance.

So in their own way, all three was highlighted at their best. Asaf got to be the cool guy, Kate got to be a watered down femme fatale, and Neptune was Neptune. Always up. But it seems like some people haven’t really gotten a chance to appreciate what Neptune brings to the table.

Thus Neptune was in danger of elimination.

And after the hassle it took getting Asaf to follow orders, Twitch was able to finally relax when he saw Jim and JaJa. Jim and JaJa had instant chemistry. They were on friendly terms and so they were able to capture that special spark they needed to pull off their dance.

Christopher Scott came up with a hip hop routine that turned out to be the second “staple” of tonight’s episode. Meaning the dance was so good it ended up being something to beat for anyone else willing to do Hip Hop next week.

And, well, it didn’t come as a surprise that neither Jim nor JaJa were up for elimination.

Then, after the duo that Nigel said he’s been envisioning for years, it was Moises, JJ, and Marissa that were given the impossible take of doing the follow up. And let’s just say the judges didn’t quite care for it.

They didn’t like the facial expressions the girls had. And both Jason and Nigel ended up agreeing that a smile was out of place during a revenge song. Paula on the other hand disagreed with the guys.

According to her, a smile was very much in place.

The woman that wrote “Snake Eyes” actually enjoyed the trio’s take on two women beating up a player. Though she did go on to advise them on how to best move their body in order to better convey their message with their body language.

And out of the three that were the last acts of the nights, only Moises was in danger of elimination.

So in all six contestants composing of both Team Street and Team Stage were up for elimination and two of them were bound to be sent home after everything was said and done. But one of the things that was revealed tonight was who had won last week’s personal battle between Street and Stage. And the winner, with an overwhelming 54 percent of the votes, was Team Stage.

But as far who was going home, Neptune and Moises were saved by all the voting in the final hour. And out of the remaining four, the judges chose to save Derek and Ariana thus Darion and Lily were the ones that had to leave the competition tonight.

Good Luck Darion and Lily on your future endeavors.