BY Kristine Francis on May 11, 2015 | Comments: one comment
Related : Recap, Television, TV 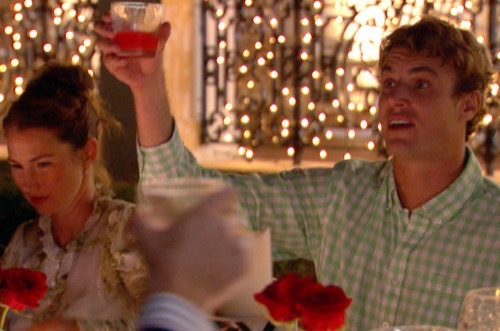 Tonight on Bravo Southern Charm returns with a new Monday May 11, season 2 Episode 9 called, “Jekyll and Snide,” and we have your weekly recap below. On tonight’s episode, Landon Clements invites the gang to her hometown down in Georgia for a weekend getaway, but the mood changes when Shep Rose’s big brotherly advice turns into a sibling rivalry with Craig Conover.

On the last episode, after the Founders Ball, Craig came face-to-face with his boss and finally learned the consequences of his partying ways. Meanwhile, Kathryn resolved to become a different person and put her troubles with Thomas behind her. When Shep and Whitney headed to Delaware to spend some quality time with the Conover clan, tensions ran high as secrets were revealed and friendships were tested. Did you watch the last episode? If you missed it, we have a full and detailed recap right here for you.

On tonight’s show as per the Bravo synopsis, “Landon invites the gang to her hometown down in Georgia for a weekend getaway, but the mood changes when Shep’s big brotherly advice turns into a sibling rivalry with Craig. Meanwhile, Whitney finds himself on the receiving end of Kathryn’s wrath once again and after Craig and Kathryn spend the night on the beach alone rumors start flying until an explosive accusation threatens to upend Thomas’ political aspirations.”

Tonight’s episode is going to be another drama packed one, which you won’t want to miss. So be sure to tune in for our live coverage of Bravos’ Southern Charm Season 2 episode 9— tonight at 10PM EST! While you wait for our recap, hit the comments and let us know how excited you are about the new episode of Southern Charm tonight.

Landon has invited everyone to come to her Georgia hometown for a weekend getaway.

Everyone is upset with Craig because he hasn’t told his parents that he’s lost his job.  Shepard says in confessional that Craig’s entire life is a facade made up of a bunch of little lies, which is now falling apart, and he is sick of it.

When Craig gets into the car with Shepard and Cameran, they ask him about what is going on. He tells them he was able to have a frank conversation with his parents about him losing his job, which was good because he was afraid they were going to find out. (Clips show that he told his parents things weren’t working out at the firm and he was transitioning from working.)

Things are awkward when Kathryn arrives at the cottage instead of Thomas, whom Whitney was expected. The two of them avoid eachother. Kathryn says in confessional that the good Whitney is fleeting and that he is always orchestrating something behind your back.

Craig, Shepard, Cameran and Landon go bike riding. Shepard continues to cajole Craig about losing his job when they start bickering over directions, which irritates Craig further. Landon is embarrassed by the guys, who are already drinking and acting a fool. Craig and Shepard get into an argument and they go back to the hotel.

Kathryn is upset that the others left her as soon as they arrived after weakly offering that she come on the bike ride with them.

At the end of the day, everyone has dinner outside. Shepard is still mocking Craig over the incident that occurred that day. Craig stands up to make a toast, and Shepard mocks him, telling him to tuck in his shirt.

Craig sits down, and everyone urges him to get back up and make his speech. They tell Shepard to stop interrupting. Craig gets up and says they’re used to going to places where there are wet t-shirt contests, and it’s nice to come to a place like this to spend time with family.

Shepard gets up and toasts Craig for taking him and Whitney to his hometown in Delaware, saying his parents are the coolest people he’s met besides his own and thanking him for his hospitality.

Thomas is acting as if Kathryn doesn’t exist. Someone says that Thomas has changed over the course of his campaign and that politics brings out the worst in people.

Whitney says he’s spoken to Thomas recently, and Kathryn says in confessional that of course he has because he is trying to be a puppetmaster.

Later, the group discusses how to make Kathryn feel more comfortable in the group with Thomas’ absence.

Whitney calls Craig disingenuous because a year ago he was calling Kathryn an opportunist, and now is trying to help her. Craig says now that they have a family they have someone to care for regardless of their relationship, and that he is Kathryn’s confidante.
Kathryn comes out, and Craig tells her that Whitney is challenging their friendship and him being her confidante. She starts screaming at Whitney, telling him he should fall on a knife and calling him scum. She says he has caused so much stress in her relationship with Thomas that she doesn’t even want to look at him. She says she doesn’t give a shit how much money Whitney has, her heart puts her above him any day. Whitney responds that her heart is a black space with a dollar sign in it. Kathryn screams that Thomas does not give her money. Craig sits Kathryn down, and urges Whitney to leave, but he continues to talk, accusing her of going out at night and leaving Thomas and their child at home. She tells him not to go there, and he leaves. In confessional, Whitney says that Thomas needs to take care of Kathryn because she needs help.

Kathryn tells Craig and Cameran that she is done with him, and that she doesn’t care who he knows or how much money he has. Craig congratulates her on standing up to him.

The next day, two of the indistinguishable blondes discuss the fact that Craig and Katheryn spent the night on the beach, allegedly having gotten lost on a go kart ride. The two don’t believe the story and think something went on.
They take the news to Whitney and Shepard, who are also suspicious.

Cameran goes up to Craig and tells her not to go out at 3 am with Kathryn. He tells her he doesn’t care what Thomas is going to think, and she tells him just not to put himself in this situation.

Cameran shares a news report on her cell phone that says Thomas has been accused of assault by Kathryn’s hairstylist. Whitney says in confessional that he thinks Kathryn has sabotaged Thomas’ campaign.

Meanwhile, Kathryn sees the story on her phone. “Oh my god,” she says.