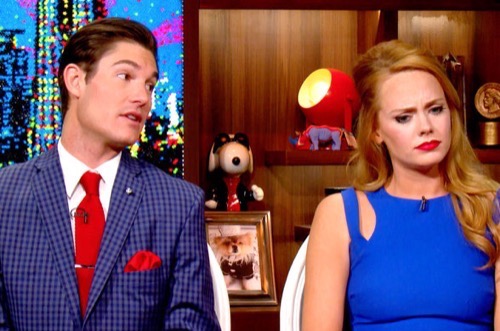 Tonight on Bravo Southern Charm returns with a new Monday May 25, season 2 Episode 12 called, “Reunion,” and we have your weekly recap below. On tonight’s episode Kathryn Calhoun Dennis, Landon Clements, Craig Conover, Cameran Eubanks, Thomas Ravenel, Shepard “Shep” Rose and Whitney Sudler-Smith come together for the first time to divulge what’s new in their lives and discuss some of the most-talked about highlights from this season.

On the last episode, as Thomas adjusted to his new post-election life, Kathryn can’t seem to let go of their old life together. Meanwhile, Patricia organized a charity event to benefit “Wounded Warriors” and got everyone involved; Whitney’s band plays, and Shep and Craig agreed to a date auction. When things didn’t go exactly as planned, relationships were pushed to the brink — perhaps to never recover. Did you watch the last episode? If you missed it, we have a full and detailed recap right here for you.

On tonight’s show as per the Bravo synopsis, “Kathryn Calhoun Dennis, Landon Clements, Craig Conover, Cameran Eubanks, Thomas Ravenel, Shepard “Shep” Rose and Whitney Sudler-Smith come together for the first time to divulge what’s new in their lives and discuss some of the most-talked about highlights from this season. Andy Cohen hosts the Charleston crew as they set the record straight on all the drama and take a look back at some of the most memorable moments from season two.”

Tonight’s episode is going to be another drama packed one, which you won’t want to miss. So be sure to tune in for our live coverage of Bravos’ Southern Charm Season 2 episode 12— tonight at 10PM EST! While you wait for our recap, hit the comments and let us know how excited you are about the new episode of Southern Charm tonight.

The cast of Southern Charm are back for the reunion and before anything even kicked off – everyone just knew they were going to be fireworks.

With the way things ended this last season, the great bromance between Shep and Craig was on the rocks. Kathryn and Thomas had finally given their relationship a mercy killing. And Shep oddly appeared to be the most mature out of all of them.

And apparently it was an epiphany. Cameran doesn’t think Shep can easily settle down. She says he’s bound to end up with a woman that was strong enough to leave him alone for the most part and have a lot of patience. Though women like that aren’t exactly lying around.

Plus Shep has actually gotten most of things he should have without the wife. This year he opened his own business and he became a homeowner. So besides things with Craig, his life has turned around. But, as for his rift with his brother from another mother, Craig and Shep say that’s just a natural part of their relationship.

They fight constantly but they do care about each other. However Shep does believe Craig is a high maintenance friend and Craig can pretty much laugh life away. So in the first hour at least, there was no drama between the guys.

Though the same can’t be said for the rest of the cast. Because once Whitney got to talking then Kathryn just had to occasionally interrupt him.

Whitney and Kathryn have hated each other since that one night they spent together. And to tell the truth, nothing is ever going to change. Especially as Whitney was considered a leading factor in Thomas and Kathryn’s breakup.

Whitney used to make fun of Thomas dating a younger woman but now that he’s dating someone that is in fact younger than Kathryn then he’s willing to change his tune. He says the problem wasn’t Kathryn’s age but Kathryn. And Kathryn clearly still has issues with him because she stated that he wanted to keep Thomas single in order to not look like the last desperate man in Charleston.

Yet the problems between Thomas and Kathryn went beyond anything that Whitney did. And that goes for that unfortunate commercial. Because while Thomas was prepared to accept Whitney’s help on the campaign, he actually told Kathryn that he couldn’t afford to have her around.

According to Kathryn, Thomas said people didn’t want to see her and Kensington because knowing about an illegitimate family is different to having it presented on their front porch. So later when things did go wrong for Thomas during the campaign, Kathryn chose not to rush back to his side. Which he demanded she do by the way. And Landon was one of the few people to support her decision to not go running back.

So Kathryn apologized to Landon for what she said on election night. It seems she didn’t mean to go off on the other woman but she was lashing out. Kathryn felt like and still feels like Thomas never acknowledge the part she played.

When he wanted her to stay in the background, she did. And she was at home for the most part keeping the house or taking care of the baby. So for him to now claim that she didn’t really want a part in the campaign and that he didn’t want his family around in order to better focus on the issues is like the matador dangling the red flag in front of the bull.

It set her off.

Though surprisingly one of the few people that can understand why she’s upset is Craig. Recently Craig and Kathryn have become good friends. And that had led to some questions about Jekyll Island.

But both still claim that nothing happened between them so until the narrative changes then other people are just going to have to accept their golf cart and their respective phones all died. And though things have gotten really ugly between Kathryn and Thomas on the show and during the reunion – it’s clear to everyone that those two still care about each other.

Albeit in a very unhealthy way.

Thomas admitted to having Kathryn followed since their split. You know in order to better aid him in court during the custody and child support issue yet Kathryn has admitted to still loving him. So that on top of all their friends believing the two will be back together in no time must mean this isn’t the end for them.

See Andy calls them Liz Taylor and Richard Burton of the group and maybe he’s not that far off.