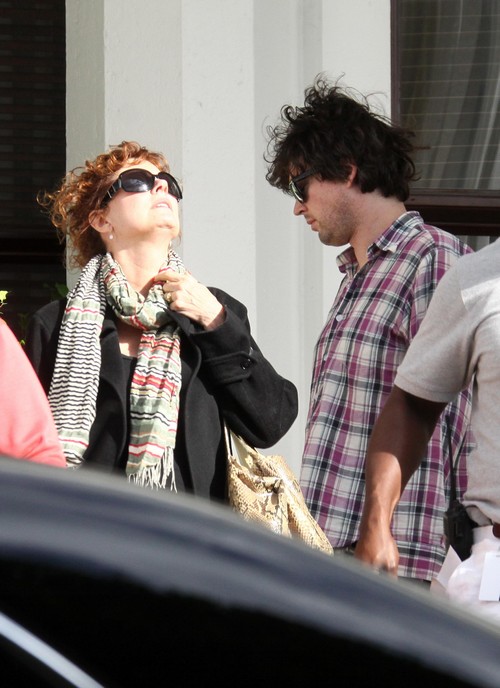 The coupling of Susan Sarandon and Tim Robbins made sense and when they uncoupled it was heart breaking. But what Susan Sarandon did next was more shocking than her turn as Janet in Rocky Horror Picture Show. Sarandon took up with 30 years younger Jonathan Bricklin after they started a hip ping pong joint together.

The strange duo of Susan Sarandon and Jonathan Bricklin continued for five years – off and on – and little discussed by either participant. Recently the pair were rumored to be more off than on but were trying to rekindle the spark until older lady lover Bricklin pulled a surprise move and took up with another AARP card holder, 64 year old Marina Picasso (yes, of THAT Picasso family).

According to the September 21 issue of GLOBE, Sarandon is deeply hurt that her young lover has taken up with another woman. The latest split of Susan Sarandon and Jonathan Bricklin seems to have been triggered by Bricklin signing on for a reality show that Sarandon did not want to appear on with Bricklin, so they broke up. But then they reconciled over the summer and were seen out and about together.

And then suddenly, they’re off again and the ping pong mogul has been seen out and about with Marina Picasso. So what is it about these lovely older ladies that has Jonathan Bricklin so entranced? Looks like it’s likely the balance in their bank accounts. Both Susan Sarandon and Marina Picasso are big bucks ladies and Bricklin may be addicted to sugar mamas.

Sarandon invested heavily in Bricklin’s New York City ping pong club SPiN and now Bricklin has talked Picasso into investing in a San Francisco version of the club. So does Jonathan Bricklin love older ladies or just love their large bank accounts? And if so, should we give him a hard time about it? Sure, why not? So here goes…

I mean really – tons of younger women flock around older wealthy men because of their bank accounts and get their sugar daddies to invest in plastic surgery, sketchy music careers and acting classes destined to be utilized only for B-movies (at best). If it’s good for the younger women, why not a younger man?

But Bricklin has defended himself as more than a wealthy granny chaser. In an interview with The New York Post, Jonathan Bricklin said he didn’t like being classified as a “boy toy” and added that, “her [Sarandon’s] family or friends maybe felt that I wasn’t good enough for her.” Bricklin says he felt inadequate because of Sarandon’s stature as a serious actress.

Bricklin also defended his choice in a lover to the Post’s Page Six saying, “She’s someone I love more than anyone I’ve ever been with, and that won’t change.” What has changed is that he’s moved on to another 60+ super wealthy woman. I can buy that he fell for one woman 30 years his senior, but two? Come on. If Bricklin doesn’t want to be called a boy toy, maybe he should date someone his own age…