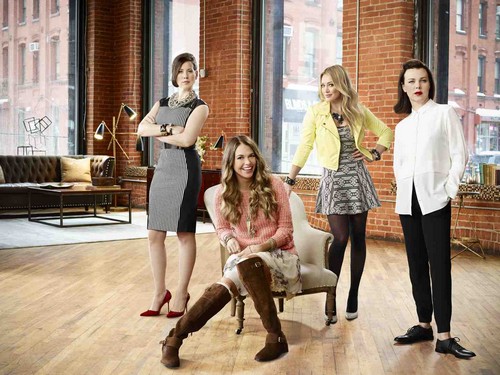 It’s about time Hilary Duff came back to the small screen! We sure have missed her since her ‘Lizzie McGuire’ days. Duff is set to star in a new television series entitled ‘Younger’ alongside two-time Tony Award winner Sutton Foster, Debi Mazar, Miriam Shor, and Nico Tortorella. ‘Younger’ is also Sutton Foster’s big jump back in to the realm of TV since her 2012 ABC family show ‘Bunheads’.

The show is centered on Liza (Sutton Foster) a 40-year old mom who is looking to get back into the job market. The problem is… she’s convinced that no one wants to hire a woman her age. The solution? To turn back time- only metaphorically of course- and become 26 again! She gets a job as an assistant at a book publisher where she befriends a young editor named Kelsey (Hilary Duff) and gets a second chance to live out her twenties.

Many fans of the multi-talented Sutton Foster mourned the cancellation of ‘Bunheads’ and are psyched to see her getting a second chance at a hit TV show. And, of course, it’s pretty hard to find someone who wasn’t a fan of Hilary Duff at one point in time. She’s insanely likable, not to mention incredibly talented. ‘Younger’ boasts an incredible creative team in addition to its all-star cast. The show is written, executive produced, and directed by Darren Star, the creator of ‘Melrose Place’, Beverly Hills 90210, and ‘Sex and the City’!

There’s a lot to look forward to with this ‘Younger’, and it looks like it holds a ton of potential for success! With Hilary Duff’s star power and Sutton Foster’s comedic timing, it’s hard to imagine that ‘Younger’ wont find an audience to appeal to.  ‘Younger” airs it’s pilot episode on TV Land, Tuesday March 31st at 10 p.m.!