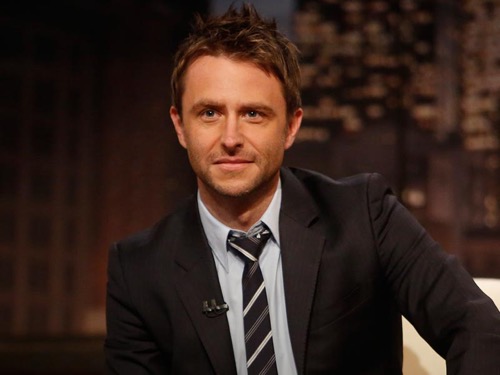 Tonight on AMC Talking Dead returns with an all new Sunday November 1, season 6 episode 4 and we have your weekly recap below. On tonight’s episode, host Chris Hardwich talks about the “Here’s Not Here” episode of “The Walking Dead” with a guest Josh Gad.

On the last episode of Talking Dead host Chris Hardwick sat down with Yvette Nicole Brown and Damon Lindelof and discussed the episode “Thank You” from The Walking Dead. Did you watch the last episode? If you missed it, we have a full and detailed recap right here for you.

Tonight on Talking Dead as per the AMC synopsis, “Talking Dead host Chris Hardwick will sit down with Frozen’s Josh Gad to discuss the episode “Here’s Not Here” from The Walking Dead.”

#TalkingDead has Lenny Jones (Morgan) as well as Josh Gad and John Carroll Lynch (Eastman). Chris Hardwick says everyone wants to know what happened to Glenn and they don’t know right now. He says this episode brought them back after what they saw last week. Lenny says this was shot out of sequence after episode eight. Chris says he like this because it explained the transformation of Morgan. He then asks John about being Morgan’s Yoda.

John says it was great to be offered this stand-alone episode and liked that Morgan returned as a madman. He says every time Morgan comes back, his relationship with Rick rekindles in a new way. Chris says John has been in so many things and John says he tries to be in everything. Josh says it felt like coming off every episode is like Fast and the Furious then now a slower play. He says the show trusts the audience to make this big moves.

He says he was pissed off by what they did to Eastman. Chris says the last few episodes have been a layer cake of separate stories at the same time. He asks why it’s important for Eastman to help Morgan. John says Eastman had likely been alone a couple of years. John says Eastman may have been going crazy. Lenny says Morgan is trying to make Eastman his conscious.

First is the In Memoriam… They list the walkers Morgan offed then the jiggly jaw walker, the fire walker, the two humans Morgan killed, Tabitha the goat, then finally Eastman. It says Eastman lost his life and goat.

The props master talks about Morgan’s spear stick then the fighting stick that Eastman had then turns his stick into a prettier element. John says he had five days to learn the aikido moves. He says it’s a mental hurdle and says walkers are easier than humans. Josh says every episode feels unique and says after six seasons, it’s still new all the time. Chris says he thinks Morgan is kind of like an addict where he can kill everyone or no one.

Lenny says a lot of people in this world have PTSD just like Eastman said and says Rick clearly has it too. Lenny says John is being modest then says he had reams of dialog and had to learn the aikido too. He says it was 106 degrees with 100% humidity and John carried all of that on him. Now it’s time for the quiz. Answers are at the bottom of this post.

Question #1 What Candy does Eastman rave about to Morgan? Goo Goo Pies, Goodie Bites or Goo Goo Clusters.
Question #2 What does Morgan use to pry open the window in his cell? Book, knife or broken zipper.
Question #3 Which of these was not written at Morgan’s campsite? Here’s not here, They all turn or Pointless acts.

Andy Lincoln talks about the episode and says it seemed like an arthouse movie. He says he liked the goat and says she was very professional. He says the locations were beautiful. Chris says in honor of Josh, they should trend #LetItGoat. Chris says someone already started a Twitter for Tabitha the Goat. Some people said they wanted her to be a surprise guest on Talking Dead. Lenny says she’s a fine looking goat. John says he worked with a goat before and Tabitha was much prettier.

John says Tabitha smelled good and was like a supermodel. Chris asks about working with the goat and John says she’s like any other actor. John says it rained once and the goat freaked out. Chris asks what animal Josh would want in the apocalypse and he says Capuchin monkey. Chris says people die indirectly because of Morgan’s actions and why he told the wolf the story. Lenny says Morgan is trying to pay it forward.

Now a poll question – can Morgan do an Eastman on the Wolf? Josh says there will be major consequences from Morgan keeping the guy and says there’s no bringing him back. 95% of people say the guy can’t be turned.
–
It’s a behind the scenes look now. The book quote was inspired by Art of War and Art of Peace. Steven Ho trained them on aikido and the sticks – he’s the guy who played Donatello on TNMT in the 90s movies. The goat wrangler brought goat cheese to the set and they added seasonings to get reactions from John during scenes. Scott Gimple sends a message about the terrapin shirt that John was wearing and says it was a bar that was closed in his life and had no tie to the storyline other than randomness.

An audience fan comes up and asks Lenny about Eastman telling him that he would hold a baby again. He says he thinks it was Eastman telling him about what he lost and would regain. Chris says he did end up holding Judith. Lenny says he called Scott to ask why he referenced a cheese maker when he had no clue. Chris gives the girl a rabbit’s foot then hands her some goat cheese from Ruby, the goat who played Tabitha and it’s in a Walking Dead cooler.

Josh says the cell not being locked was profound and was about free will. He says Morgan could have checked it out but instead he broke a zipper and tried to get out another way. He says Morgan is like going from Yoda to Darth Maul then back. Denise Huth shows some location info on the cabins. They talk about how lucky they were to find the location just 30 minutes from where they usually shoot. Lenny says Morgan was suffering with survivor’s guilt and that’s why he wants to die.

He says he thinks Morgan is killing until something comes to kill him and is mad because Eastman took out the creature that would have killed him. John says being someone in that world that won’t kill is really brave. Now another poll – who would last longer in the apocalypse- Josh Gad or Olaf? Josh says he would hide but Olaf is snow so the walkers probably couldn’t hurt him even if they ate him but says the Georgia heat might kill him. It’s 55% for Olaf and 45% for Josh. Josh says he feels good about those odds. Chris shows off a box set of Morgan and the impaled walker.

Now a peek at next week’s Walking Dead. We see Deana watching them hauling dead bodies away and Maggie talking to some of the women about Glenn sending a signal then Rick calling for them to open the gate. Lenny says Morgan feels guilty about the wolves attacking when he let them go before but he still stands by his decision.