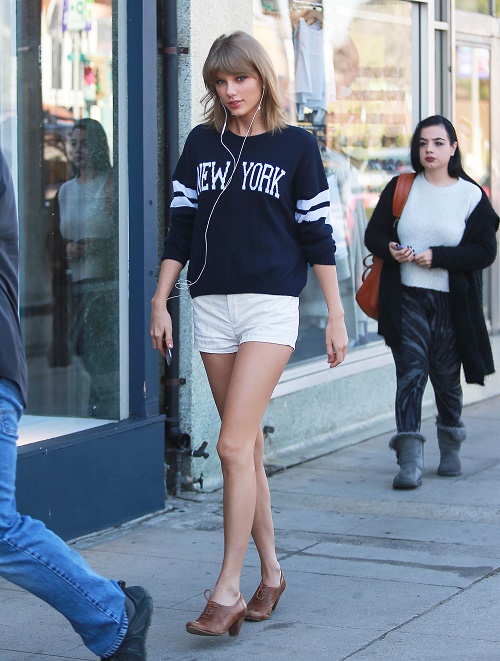 Taylor Swift is a party animal and loves to go clubbing. You may have even had a few drinks with the pop star and not even realized it – because she wears disguises! Taylor Swift has a squeaky clean image and aside from her disastrous dating life, she is basically scandal-free. Taylor is not a saint though. She parties just as hard as the other celebrities and has most likely gotten herself in some precarious situations – but photos of her appearing wasted or less than classy never hit the internet, because no one realizes it is her!

According to the March 30th edition of OK! Magazine, “Taylor Swift reportedly relies on a series of elaborate disguises to avoid being recognized during wild nights out.” A pal of the pop singer explained to the tabloid, “Taylor loves taking photos with fans, but she knows after a few drinks she gets awkward and doesn’t look her best. She surrounds herself with people she trusts, and they are helping her come up with really inventive looks. She’s got an enormous wig collection, so she will use one of those and dress down in baggy clothes. Once she is in the club she heads to the bathroom to change in to something sexier. The last thing she wants is some embarrassing pic of her looking bleary-eyed to go viral.”

So, there you have it. Taylor Swift is apparently super sloppy when she is drinking, and parties just as much as the other celebrities her age. The only difference between Taylor and her fellow celebs is that she is smart enough to hide it. Maybe she could give her on-again BFF Selena Gomez a few tips? Did you think that Taylor Swift was the squeaky-clean good girl she presents herself as? Are you surprised to know that she parties just as much as everyone else in Hollywood? Let us know what you think about Taylor’s Party Girl alter-ego in the comments below!