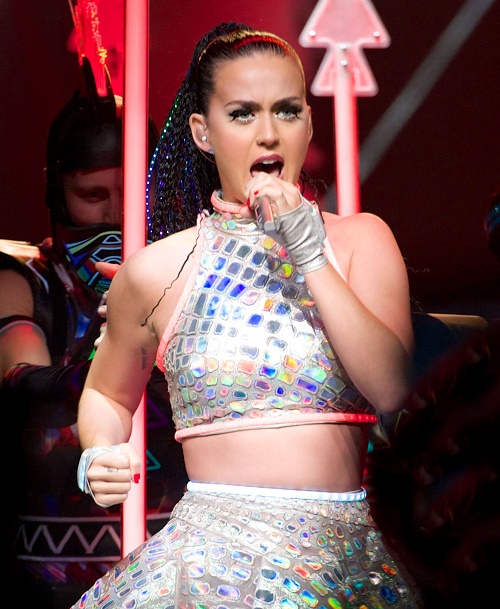 The Katy Perry Super Bowl half-time show was the star of this year’s game, which also means that Taylor Swift very resolutely did NOT watch this year’s Super Bowl. However, that doesn’t mean that Katy resisted the urge to make a subtle dig against Taylor, especially since she was on one of the most publicized national platforms that was available to her. Really, the only other opportunity to diss Taylor Swift will come at the Grammy Awards, and there’s no guarantee that she’ll win there – or that Taylor won’t retaliate. A feud is a feud, right?

Now, Katy’s already indirectly referred to Taylor in several of her interviews, telling Billboard recently, “If somebody is trying to defame my character, you’re going to hear about it.” And in addition to that, Katy more or less designed an entire section of the half-time show to make fun of Taylor. Didn’t notice? Well, Katy specifically had all of her dancers’ swimsuits during ‘California Gurls’ resemble Taylor’s favorite swimwear – a high waist bikini with polka dots. How many times have we seen Taylor Swift wear that outfit? And look, Katy just HAPPENED to be dressing up all her dancers in the same outfit? Coincidence? I think not.

I mean, as far as disses go, this was fairly subtle. I have to give kudos to Katy Perry for not being overtly obvious about her hatred for Taylor, especially when she could have easily gotten away with it. But she probably realized that if she was any more obvious, Taylor probably would have written a song about her and then played it for the whole world to hear.

What do you guys think about Katy Perry’s ongoing feud with Taylor Swift? Do you think it will get much worse, or will it just peter out? Let us know your thoughts in the comments below.