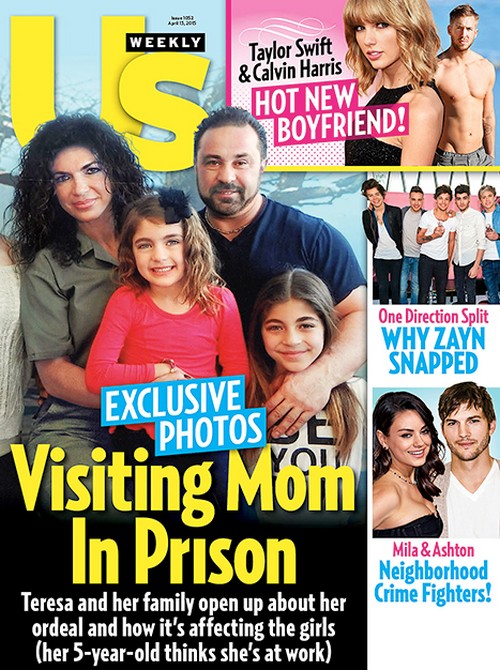 Teresa Giudice is making money off being in prison and plans a future based on life as an ex-con. Teresa Giudice was the quintessential Salmon-Faced Cruella De Hell once upon a reality television time. But then that whole prison thing happened and her money dried up and people whispered “Schadenfreude” and… well, the rest is history. Another scandalous scandal replaced her scandal and everyone forgot about the Teresa Giudice from yesteryear.

Until now that is. Teresa Giudice and the Giudice family (minus the 5-year-old) posed – yes, they actually posed – for a photo shoot in, you guessed it, prison. Oh dear lawd, I can’t. I just can’t. They look like Christopher Walken after a bad acid trip; they just need the dancing and the jazz-hand-clapping. The photos were taken on a visitation day, because, you know, prisoners pose for photos during visitation hours all the time!

According to Us Weekly, “A recent family photo taken in the visitation room at the Federal Correctional Institution in Danbury, [Connecticut], shows just how much the Bravo-lebrity had changed. In the pic — shared exclusively with Us by the Giudices themselves — Teresa, 42, sports shorter, curly hair, a green prison jumpsuit, and considerably less makeup than she wears on RHONJ.”

Joe Giudice – husband and partner in crime – allegedly cries “like a little baby” when the visitations end. “I cry more than the girls,” Joe Giudice told Us Weekly. For those of you who don’t know, Joe and Teresa committed massive fraud a couple of years ago, but they were caught (big surprise there!) and lost everything, including their lucrative stint on Real Housewives of New Jersey and, worst of all, their credibility.

Joe’s three-and-a-half-year sentence will commence as soon as Teresa finishes her 15-month sentence. They agreed to serve their time separately, because one parent is required to stay with the children at all times. Teresa opted to go first, because the “selfless sacrifice” gave her the opportunity to right her many, many wrongs.

Celeb Dirty Laundry learned that Teresa’s “sacrificial lamb” act was nothing more than a publicity stunt. According to an exclusive insider, “Teresa is planning ahead. Really far ahead. A book deal, a spin-off show… The possibilities are endless. This is the entertainment industry. One doesn’t simply walk away from something as scandalous as Teresa Giudice’s imprisonment.”

I’ll never be able un-see the scary family photo from hell. Thank you, Joe. No, really, thank you.