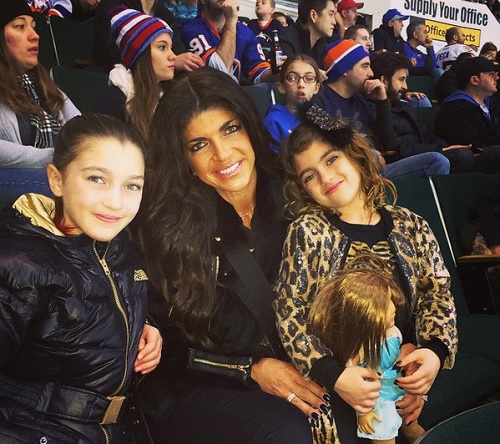 Teresa Giudice is divorcing her husband Joe Guidice!  Real Housewives of New Jersey star Teresa Giudice has been in prison since January 2015, and she has now served three months out of her fifteen-month sentence.  Teresa’s hubby Joe, who will be heading off to prison once Teresa returns, finally spoke out in an interview with Extra! and gushed about how much he appreciates his wife now that he has been raising their four daughters on his own.  In the interview, Joe raved about how amazing his wife Teresa is, but according to insiders, Joe neglected to leave out a few tidbits of information, like the fact that she has been meeting with a divorce lawyer while she is behind bars.

Teresa Giudice and Joe Giudice’s relationship has been tumultuous over the years, which we have all seen on Real Housewives of New Jersey.  Once Teresa Giudice headed off to prison to serve her 15-month sentence, the gravity of the situation began to settle in and the housewife started to resent her hubby Joe and blamed him for the crime that she was charged with.  And, to add insult to injury, Teresa has only been in prison for three months and Joe has already let their family’s house go into foreclosure and been caught up in a cheating scandal.

Joe Giudice gushed to Extra, “When you have four kids, you have to stay strong.  Her being away definitely makes me appreciate her way more, a lot more, and you know everything she did.”  According to CDL’s insiders, the only thing Joe appreciates about Teresa is the fact that she is behind bars right now and he can do as he pleases.  A pal close to the Giudice family snitched to us, “Teresa knows what Joe has been up to, and she really could care less about his cheating at this point because as far is she is concerned their marriage is over.  She is just furious that he hasn’t been taking care of their girls like he promised and they could be homeless by the time she gets out.”

Do you think that Teresa Giudice will file for divorce while she is in prison or wait until her sentence is up?  Is Joe Giudice in denial about his marriage, or does he really have no clue that Teresa is divorcing him?  Do you think that Joe will be able to keep a roof over his kids’ heads until Teresa comes home?  Let us know what you think in the comments below!