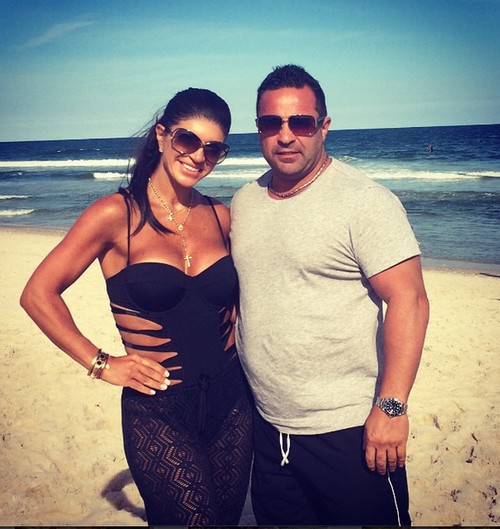 Teresa Giudice and her daughters will be homeless because cheating Joe Giuduce spent the mortgage money partying with hookers while his wife was in jail. It’s not bad enough that she’s in prison, but Teresa Giudice is also getting hit with waves and waves of bad news. First she finds out that Joe Giudice has been cheating on her with random strippers from Atlantic City, and now she finds out that her house is going into foreclosure.

Obviously, Teresa thought she was leaving her family and her house in good hands when she left everything to Joe. However, going to prison first might not have been the best move for her, since the popular theory is that Joe Giudice has gone and spent all their mortgage money [what he was supposed to use on payments] to party with strippers in Atlantic City. Obviously, we’ve already seen the cocktail waitress that Joe allegedly cheated with, since tabloids managed to actually get pictures of them together. No matter how many times Joe Giudice tries to deny the cheating rumors, he should realize – pictures don’t lie.

Of course, I don’t think anybody assumed that he was actually taking money away from his mortgage payments to fund his partying and cheating lifestyle. But on second thought, it makes complete sense. Joe Giudice is more or less broke, his wife is in prison, and he was just charged with fraud – in what universe does anyone think that he’s actually reliable with money? Teresa would have been better off hiring an independent party to watch over their finances, especially if she does end up serving Joe with a divorce from prison. At least that way, she could have kept her house out of foreclosure.

Now, Radar Online’s source claims that Joe Giudice and Teresa Giudice are planning to ‘let’ the house go into foreclosure, but it’s unlikely something that either of them wanted.

What do you guys think about Teresa Giudice’s house going into foreclosure, and Joe Giudice spending all their money on hookers and partying? Let us know your thoughts in the comments below.