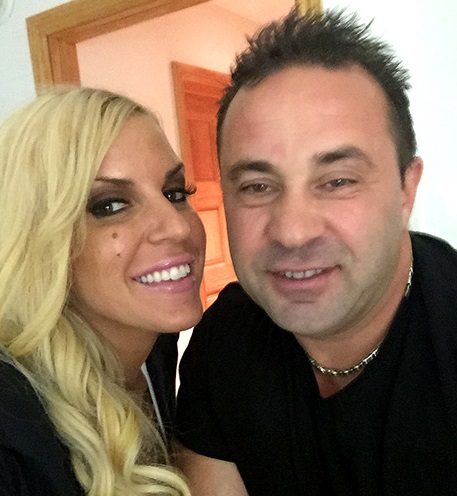 Joe Giudice is cheating with Jamie Jackson while wife Teresa Giudice rots in prison and prepares for divorce. Joe Giudice and Teresa Giudice are ostensibly still married, although it’s really only a marriage in name at this point. Teresa Giudice is basically stuck in prison while Joe Giudice goes gallivanting around Atlantic City with models and waitresses. We recently covered reports alleging that Joe had cheated on Teresa with a hot blonde cocktail waitress in Atlantic City, and further reports suggest that Joe is still in touch with that blonde – and that he could end up leaving Teresa Giudice for her! The minute Teresa gets out of jail she plans to divorce the cheating felon who put her behind bars!

Apparently, Joe and this waitress, Jamie Jackson, first started their fling in November of 2014. They cooled off for a few weeks in December while Teresa was preparing to go to prison, but things quickly started back up again over the past few weeks. Radar Online’s sources explain, “They are speaking again now that the story is out.” Plus, the sources claim that there are many more pictures floating around proving Joe’s affair with Jamie, which is bad news for both Joe and Teresa.

Obviously, there’s not too much Teresa Giudice can do in prison apart from pout and cry and scream, all of which she’ll undoubtedly do. She can’t even wear a hot outfit and try to find a rebound fling because, again, she’s in prison. And for Joe? Well, public opinion of Joe Giudice is already at an all-time low, so I don’t know that it can get much lower. However, this affair is bound to make him look even worse to the public than he already does, which isn’t a very good thing considering that he’s still reliant on Teresa’s support to keep his reality TV career going.

What do you guys think about Joe Giudice cheating on Teresa Giudice by having an ongoing affair with a cocktail waitress from Atlantic City? Of course Joe and Jaime ran to Us Weekly to deny that they are cheating – with Joe claiming he only met Jaime twice – like we believe anything coming out of the professional liar’s mouth? Like convicted felon Joe Giudice tells the truth? And why, when his wife is locked in jail, is Joe cavorting in AC with ‘cocktail waitresses’ at all when he should be at home taking care of his family?  Do you think he’ll continue cheating now that everyone’s found about the affair? Let us know your thoughts in the comments below.