The Amazing Race Recap – Non Elimination Round: Season 26 Episode 9 ‘Can I Get a Hot Tub!’ 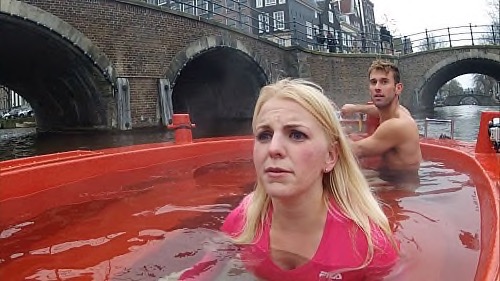 Tonight on CBS the Emmy award winning show The Amazing Race hosted by Phil Keoghan returns in an all new Friday April 24, season 26 episode 9 called Get “Can I Get a Hot Tub!” and we have your weekly recap below. On tonight’s episode, the race continues in Amsterdam with the five remaining contestants.

On the episode when the race continued in Namibia, a flat tire deflated one team’s hopes of leading the pack and the dreaded Double U-Turn returned. Did you watch the last episode? If you missed it, we have a full and detailed recap right here for you.

On tonight’s episode as per the CBS synopsis, “the competition heats up as the final five teams race to Amsterdam and take a dip in a floating hot tub in search of their next clue.”

#AmazingRace begins with more camping. Laura and Tyler are excited about it but Hayley and Blair are still fussing at each other. We see a montage of all their fights and they agree it’s a work in progress. They all sit down together for dinner at the camp site and Matt and Ashley tell Jelani and Jenny that it was just game play when they u-turned them. Jenny says if they have a chance, they’ll single them out for a delay.

Laura and Tyler leave a little after noon and fly to Amsterdam which is more than 5,000 miles away. Matt and Ashley leave a minute later. Hayley and Blair leave 10 minutes later and she’s still talking about the sexy pilot she liked. Looks like all the teams are on the same flight out of Namibia. The flight touches down in Amsterdam and the race is back on. Tyler thinks they’re going to be on a boat and Laura says he’s always wrong.

They head to Jagershuis – it’s at a wooden shoe shop and they get a #Roadblock that sends them into the shop and they have to find a perfect match of these intricately painted shoes. Jelani and Jenny win date night and the teams are told one of them first has to put on a costume. Tyler talks about being in lederhosen, in drag, like Bond in Monaco and now in traditional garb.

They look at a shoe then have to walk out and try to find a matching one. There’s a room full of literally 1,000 shoes that all look almost alike. Matt, Tyler, Jenny, Rochelle and Blair are all searching. Jenny is the first to get a match on they get their clue to go ride bikes along the Amstel River to the Munttoren. They head out in 1st place to search for the ferry.

Tyler is next to get a shoe match and he and Laura head out to get on their bikes. They make it to the Pontveer and pull their bikes on board the ferry. Hayley is clapping her hands and telling him to hurry, hurry. Blair is next to get the right shoe and they leave in 3rd. Hayley complains about the weather and that her hands are cold. Matt is freaking out and Rochelle is trying to keep her cool and focus.

She brings the correct shoe up and that puts them in 4th place. Matt tries to figure out what he’s missing and thinks it’s the hole on the side that’s distracting him but it’s the painted design that’s the issue. Laura and Tyler show up first to the church to face the #Detour which is soak or shuffle. You can ride an electric powered hot tub boat or play a dutch table top version of shuffleboard.

Laura and Tyler choose the hot tub detour. Hayley whines the whole bike ride for Blair to wait on her. He says he’s just 10 feet ahead and she says he’s not being a team player. He gives up and rides beside her and then she starts telling him to hurry. What a crazy b*tch. Matt is on his 31st attempt to find a match and has no clue what’s the problem. She tells him to not give up.

Jelani and Jenny make it to the church and also decide to do soak. It’s really chilly as they slip down to minimal clothing. The water in the tub boat is nice and hot. Mike and Rochelle choose the shuffle detour. Hayley and Blair are looking for the soak. Matt finally gets a clue about what he was missing and on his 43rd attempt, finally gets the match.

Hayley and Blair are lost and she fusses at him. Blair is trying to hold his temper in check and she won’t shut up and he tells her to stop screaming. She rants because she says that’s the street she told him to turn on before. She screams that he has to start listening. She calls him a freaking idiot.

Blair just wants her to shut up with all her complaining. Mike and Rochelle make it to the Dutch shuffleboard place and get a demonstration of the game. Laura and Tyler correctly guess that the clues meant ice skating rink and that takes them to the pit stop. They win a trip to Seoul, South Korea for coming in first place. Jelani and Jenny are in the soak boat writing down their clues.

Hayley and Blair get in the boat and take off but are behind. Mike and Rochelle are mastering their tabletop shuffleboard game. The locals are laughing at the Americans – you have to wonder what you’re supposed to wear in those boats because they’re giggling and snapping photos of them. Jelani and Jenny misses something and have to go back and look at the clues again.

Jelani and Jenny are passing Hayley and Blair and she says to act confused. Jelani and Jenny figured out skating rink but didn’t get the i’s part. Matt and Ashley decide to do the shuffle detour. Mike gets the score they need and they get their clue to the pit stop which puts them in 3rd place. Hayley and Blair arrive in 2nd place. Blair says she doesn’t handle stress well but they’re still in it.

Matt scores 42 points right away and Ashley only has to get 9. Matt coaches her on what to hit. They have to reset because they were just a couple of points short. Jelani and Jenny get a hint from a pedestrian that the five i’s meant “ice.” Mike and Rochelle go the wrong way and fall behind Jelani and Jenny who take 3rd place. The first three couples were all blind dates.

Mike and Rochelle finally make it there in 4th place. That leaves Matt and Ashley in last place. They get their score and pit stop clue and head out to find out their fate. Phil tells them it’s a non-elimination leg and they are ecstatic. He says in the next leg, they’ll hit a #Speedbump and says they’ll have a lot of catching up to do.