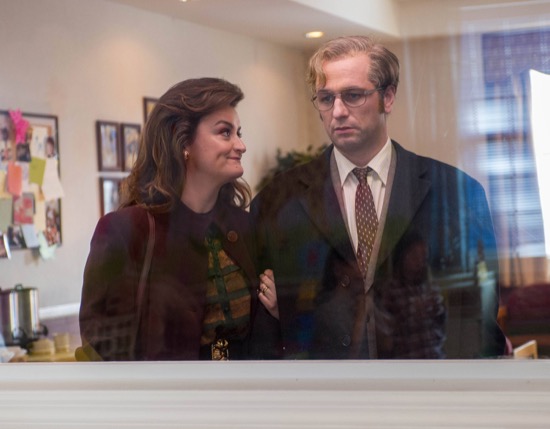 Tonight on FX The Americans airs with another all new Wednesday, February 25 season 3 episode 5 called “Salang Pass,” and we have your weekly recap below. On tonight’s episode, Elizabeth [Keri Russell] takes drastic measures to complete a mission.

On the last episode Philip faced a moral dilemma while developing an asset. Philip and Elizabeth’s friction escalates. Stan developed a theory with serious repercussions for national security. Paige made a surprising birthday wish. Written by Peter Ackerman; directed by Thomas Schlamme. Did you watch last week’s episode? If you missed it, we have a full and detailed recap right here for you.

On tonight’s episode per say the FX synopsis, “Elizabeth takes drastic measures to complete a mission. Meanwhile, Stan tries to save Nina.”

Tonight’s episode looks like it is going to be a great episode and you won’t want to miss it, so be sure to tune in for our live coverage of FX’s “The Americans” Season 3 Episode 5 at 10 PM EST!

Tonight’s episode of The Americans kicks off with Martha and Clark at an adoption agency, they’re window shopping for children. Clark reminds her that they aren’t taking one home today, she whines about how badly she wants to raise a child with him and start a family.

Elizabeth is with her sponsor Lisa, she is comforting her about her marriage and her husband Maurice’s drinking problems. Elizabeth says she wants to “help Lisa out” and offers her a cabin that used to be her mother. She thinks Lisa should stay there for a few weeks to get her mind together and give Maurice some space.

Stan corners Oleg in the park, he says that the Russian defector Zelena is actually a spy. Stan says that he will not press charges against Zelena and expose her, in exchange for Nina. Oleg wants to help but he really has no idea if Zelena is a spy or really a defector. Stan tells Oleg that if he wants to help Nina he better find out.

Phillip meets up with Yousef, Yousef argues that he already paid his dues and led them to the Afghans. Phillip laughs that they are not done, he needs them to make peace with the ISI. Yousef argues that is not an option. Later that night Phillip fills Elizabeth in on his day with Martha and says that she is shopping for foster care kids. He reminisces about when Paige and Henry were so little, Liz changes the subject and wants to know where he is with Kimberly. Phillip is meeting her tomorrow night, but he is concerned because she is so young.

Stan comes over for dinner with the Jennings family and Paige raves about her Baptism – she wants to buy a new dress. Elizabeth argues that she can wear an old dress, but Phillip overrules her and says that he will take Paige dress shopping.

The next day Phillip meets up with Kimberly at a high-school party under a bridge, Phillip is thrown off by all of the partygoers he thought that they were going to be alone. A couple of guys in letter jackets give Phillip a hard time and Kimberly drags him away. He presses her about their age difference, she whines that she will be 16 in 7 months. Kimberly says that in a few days her parents will be out all night for a fundraiser, she invites Phillip to come over to her house and smoke with her.

Phillip takes Paige dress shopping for her Baptism dress, he picks out a beautiful dress and tells her to try it on – she whines about the price tag on it and he orders her not to worry about it and to go try it on. He heads home and Stan arrives for drinks, he reveals that one of the girls from the self-help group that they went named Tori called the FBI to ask Stan out. Phillip jokes that the whole point of the group was to get back together Sandra, Stan says that obviously isn’t going to happen.

Elizabeth sneaks out on a mission, she goes to a factory worker from Northrop’s house late at night. He is working on his car, and laying underneath it in the driveway. Elizabeth cranks the jack and makes the car fall on his and crush him to death. Now, her sponsor Lisa can transfer to Northrup because there will be an empty position, and Elizabeth can use her to get the information that she needs from the factory.

Back at home that night Elizabeth is furious with Phillip about over-ruling her and taking Paige dress shopping. She thinks it is ridiculous that he is suddenly supporting the Baptism, she knows he is doing it just because he doesn’t want Paige to be recruited.

The next day Stan meets up with Oleg, he tells Stan that he did some snooping around at ht eoffice and couldn’t find anything on the defector Zedlena. They both bicker over which one of them loves Nina more, Stan warns Oleg that she doesn’t have much time in the prison and the defector is their only hope.

Elizabeth visits Lisa at the cabin and Lisa squeals that Northrop called her and a position suddenly opened up at the factory so she is being transferred. Lisa notices that Elizabeth is wearing new clothes and has a designer bag. Elizabeth says that she met a rich consultant who takes her out for drinks and buys her things just so that she will tell him stuff about what she is doing at work.

Phillip gets his disguise on and heads over to Kimberly’s house, her parents are out for the night. She invites him upstairs to see her bedroom. They sit down on the porch and smoke week together, Phillip brings up her Dad’s job – Kimberly has no idea that her dad is in the CIA. She says that he works in the agriculture department for the state. Kimberly rants that her Dad is never home and if he had another family somewhere else, she wouldn’t even be shocked. They head back inside and start raiding the refrigerator. Afterwards they lay down on the couch to watch TV and Phillip waits until Kimberly falls asleep and then he sneaks upstairs to snoop around – he goes through her Dad’s briefcase and takes photos of all of the contents and slips some sort of surveillance device inside.

Phillip heads back downstairs and picks Kimberly up and carries her upstairs and puts her in bed, Kimberly starts kissing him until they hear a car pulling up outside. He grabs his coat and races downstairs and out the back door of the house before Kimberly’s parents catch him. Phillip heads home and Elizabeth questions him about what happened – he groans that her parents came home and he had to run out of the house like a teenage boy. They lay in bed and discuss when they were trained to seduce men and women, Phillip admits that he feels bad for Kimberly and he hasn’t slept with her. He asks his wife if he should sleep with the 15 year old girl – Elizabeth replies “honestly I don’t know.”