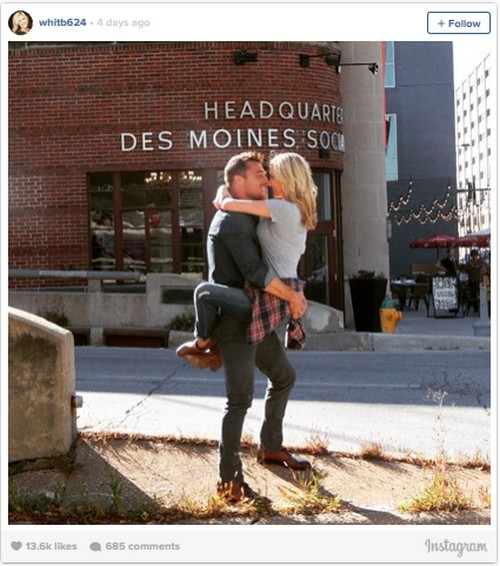 The Bachelor 2015 spoilers explain who won Season 19, Whitney Bischoff, why her relationship with Chris Soules is already failing and why there will be no wedding. Season 19 Bachelor spoilers have been teasing for months now that Chris Soules will give Whitney Bischoff the final rose and get down on one knee and propose to the fertility nurse from Chicago in the 2015 Bachelor finale. But, just because Chris Soules asks Whitney Bischoff to marry him – doesn’t mean there will actually be a wedding. And considering the success rate of Bachelor and Bachelorette couples lately (ie: Andi Dorfman and Josh Murray, Juan Pablo and Nikki Ferrell), it doesn’t look good for Farmer Chris and his new fiancée.

Reality Steve, the Bachelor blogger and spoiler king, announced weeks before the Season 19 Bachelor Premiere that Whitney Bischoff was the 2015 winner – but according to Reality Steve the odds of Whitney and Chris making it down the aisle and saying their “I Do’s” are slim to none. During a recent live video chat with Bachelor fans Reality Steve dished, “My guess is they are doing the long-distance thing until they decide if they actually do want to get married, which I don’t think will happen.” Reality Steve went on to say that the reason Whitney Bischoff got the final rose from Chris Soules is because she “played the game right” and Whitney even confessed she had been studying the show for years.

So, it looks like we have another Bachelor showmance on our hands – which seems to be the norm for recent seasons. Whitney Bischoff was determined to win Season 19, regardless of whether she actually wanted to pack her bags and move to Iowa and become a house wife. But, it sounds like once she got the final rose the gravity of the situation set in and she began having second thoughts about playing house in the middle of nowhere, Iowa.

Do you think that Chris Soules and Whitney Bischoff will actually get married? Or will they milk the spotlight for all its worth, and then announce the wedding is cancelled when the next cycle of The Bachelor occurs. Chris Soules is rumored to be joining Dancing With The Stars – which means their relationship will be on hold for another few months after the Bachelor finale airs and they will still be spending little to no time together. Do you think their relationship is doomed? Let us know in the comments below and don’t forget to check CDL tomorrow for more The Bachelor 2015 spoilers and news.