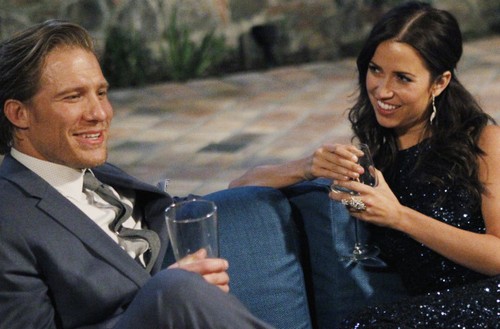 The Bachelorette 2015 spoilers tease that Episode 4 of the reality TV dating show will air on Monday, June 8 and Kaitlyn Bristowe will continue her search for love. Spoilers for the upcoming episode of The Bachelorette tease some crazy drama for Kaitlyn and her remaining guys, and the highly anticipated arrival of Andi Dorfman’s ex Nick Viall. The Bachelorette spoilers tease that Episode 4 will kick off with an epic showdown between Clint Arlis and Kaitlyn – which will end in her kicking him off the show before the rose ceremony, surely his boyfriend JJ won’t be too pleased.

According to Bachelor blogger Reality Steve’s spoilers, Kaitlyn Bristowe will decide to cancel the rose ceremony after Tony quits and Clint is booted, The Bachelorette orders the remaining guys to pack their bags because they are headed to New York City. While Kaitlyn Bristowe is in NYC, they will head out on two group dates and one 1-on-1 date. Spoilers tease that the first group date will be a rap battle, with special guest star Doug E. Fresh. Justin emerges as the shining star of the battle, and is rewarded with the first date rose and some alone time with Kaitlyn. The second group date will find the guys and Kaitlyn at the Broadway musical Aladdin, and dentist Chris Strandburg receives the second date rose.

Reality Steve’s spoilers tease that Nick Viall surprises Kaitlyn Bristowe in NYC, and asks her for a chance to join the show. Rumor has it that Kaitlyn and Nick were hooking up before she began filming The Bachelorette, but Kaitlyn insists that they were “just friends.” Kaitlyn welcomes Nick Viall with open arms; however, the other guys that she is dating aren’t thrilled by his arrival. Episode 4 spoilers tease that while Kaitlyn is off on a romantic date with Jared Haibon and enjoying a helicopter tour of New York City, Nick Viall will have an altercation at the hotel with the other guys. Also during Episode 4, Bachelorette fans can expect to see Chris Soules’s quirky ex Ashley Salter make a surprise appearance, and help Kaitlyn get ready for one of her dates.

The Bachelorette spoilers tease that while Kaitlyn and the guys are in New York City a rose ceremony will take place and Jonathan Holloway, Ryan Beckett, and Corey Stansell will be eliminated – thoughit is unclear whether the rose ceremony will air during Episode 4 or Episode 5. One thing is for sure: Bachelorette fans will not want to miss a single second – because there is sure to be some major drama in New York City.

What you think about Nick Viall joining the show? Did Kaitlyn make a mistake allowing him to join late. Do the other guys have a right to be upset? Let us know what you think in the comments below and don’t forget to check CDL tomorrow for more The Bachelorette spoilers and news!