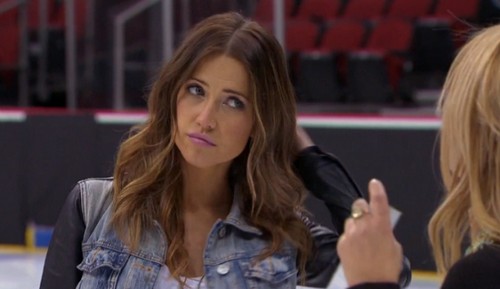 The Bachelorette 2015 spoilers tells us that Kaitlyn Bristowe has a boyfriend back home in Canada and the Nick Viall sex scenes are fake. Kaitlyn Bristowe is currently searching for a husband on Season 11 of The Bachelorette, but spoilers indicate that love is the last thing on Kaitlyn’s mind and she’s just there for the fame and perks.  Kaitlyn Bristowe has over a dozen suitable bachelors falling all over each other trying to win her over, and some of them would make great husbands (aside from Nick Viall).  But, according to a new report, Kaitlyn has no intention of marrying any of them because she has a boyfriend back home in Canada.

The June 29 edition of National Enquirer reveals that Kaitlyn Bristowe is dating Canadian firefighter Trevor Partlo – and she was dating him the whole time she was filming The Bachelorette.   An inside source dished to National Enquirer, “You could say that Kaitlyn’s firefighter hunk is still fanning her flames.  The truth is at the end of the day none of the guys on the show made her fall in love.  Kaitlyn is supposed to be keeping a low profile while the show is still airing, but she and Trevor are still hooking up!”

So, how does Trevor’s boyfriend feel about her having sex with Nick Viall while she was filming The Bachelorette?  Well, according to National Enquirer Trevor is totally cool with it…because he doesn’t think that it really happened!  Apparently, Kaitlyn told Trevor that the sex scene between her and Nick in her hotel was all staged for the show – and she didn’t sleep with him!  Yeah, we’re not buying it either…

Remember when Britt Nilsson said during The Bachelorette premiere that Kaitlyn wasn’t even looking for love?  Well, the producers probably should have listened to her, because Season 11 of The Bachelorette is turning out to be a huge joke.  Do you think Kaitlyn ever had any intention of finding love on the show, or was she just after fame?  Was Kaitlyn telling the truth to her boyfriend, was the whole show staged or did she really hook up with Nick Viall?  Let us know what you think in the comments below!