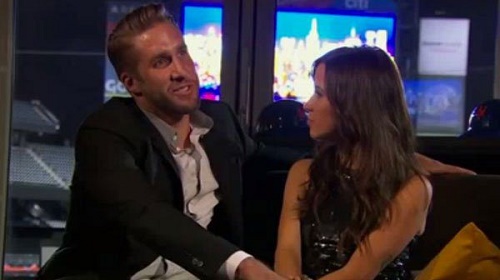 Is Shawn Booth cheating on Bachelorette Kaitlyn Bristowe? We are only halfway through Season 11 of The Bachelorette, and final rose ceremony spoilers are leaking left and right. First, Bachelor blogger Reality Steve claimed that there is no The Bachelorette 2015 winner, and Kaitlyn Bristowe decided not to give the final rose to anyone. Then, multiple rumors began popping up hinting that Reality Steve’s spoilers are wrong, and Nick Viall is the 2015 winner. However, then Kaitlyn Bristowe posted a video of herself in bed with contestant Shawn Booth – leading fans to think that she is currently engaged to him.

At this point, it is anyone’s best guess as to who Kaitlyn’s Bristowe’s Season 11 winner is. But, if it is Shawn Booth, then Kaitlyn might want to have a chat with him because he is cheating on her! Rumored Bachelorette winner Shawn Booth was photographed out and about on a booze-filled bender with country music singer Bri LoBue. Bri dished to OK! Magazine that she met Shawn during the 2015 Country Music Festival Awards outside of a bar in Nashville at 3:30 in the morning. Shawn was surrounded by a gaggle of girls, but he still managed to find time to hit on Bri!

According to Bri, she thought Shawn was just a “random drunk guy,” and had no idea he was on The Bachelorette. She also dished to OK! Magazine that Shawn was very “touch feely” when they posed for the picture together outside of the bar. We wonder if Shawn was out drinking all night and flirting with every girl in Nashville before or after his slumber party with Kaitlyn Bristowe that she shared on SnapChat?

Do you think that Shawn Booth and Kaitlyn Bristowe are engaged right now? Did Shawn cheat on Kaitlyn during his booze-filled trip to Nashville? Let us know what you think in the comments below and don’t forget to check CDL for all of your Bachelorette 2015 spoilers and news.