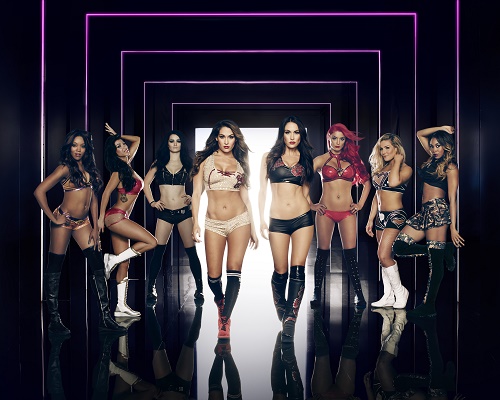 The Bella Twins, Nikki Bella and Brie Bella, talk with CDL about what makes them tick and how they bring the heat on the popular E! series Total Divas. With the show returning on Sunday, January 4th, fans are anxious to find out what’s in store for all their favorite divas. Many questions were left unanswered at the end of the last episode, and fans are excited to get caught up with The Bella Twins, who lead the dramatic lifestyles of two beautiful WWE Divas.

It’s not easy to track these busy ladies down, but we were able to steal some time with them and ask the questions CDLers want to know! The gorgeous twins, who are undoubtedly fan favorites, have carved out quite a career for themselves in an industry that seems made for them. While it seems these two were born Total Divas, we wondered how Nikki and Brie came about their career choice.

Brie tells us, “I saw Divas on TV in the early 2000s and was fascinated. I was like, Whoa, this is our calling. We both loved athletics and entertaining, being in front of a camera, the drama..I was like, “This is It!” Brie then went to share the exciting idea with sister Nikki who, at the time, was dominating the soccer field and was about to move to Italy to play professionally. Brie researched the Diva Search LA auditions for her and Nikki and convinced Nikki that they were “bad ass” enough to do this, and it seemed to combine all the things they loved most. They took the chance and the rest is history!

It is pretty safe to say that fans are very happy about the twins’ career choice, but we wondered what the ladies might have done if they hadn’t gone into wrestling. Those who watch the show know the ladies are multi-talented and intelligent…but what career path would each have chosen if they hadn’t become Total Divas? Nikki tells us, “I likely be in the movie business…action movies, or tv. I’m a real estate agent, so if I did that, I’d want to sell ocean front properties.”Fans of the show were able to see Nikki’s real estate skills in action!

Brie shares that her path would be very different, “I would have joined the peace corps, travelled the world. I actually planned to join when I was 18. I am just a hippie at heart. I’d be doing something to help save the planet.” Brie shares that hubby, Daniel Bryan (who goes by Bryan), had the same career path in mind, noting that the two joke about the fact that if they hadn’t gone into wrestling and met one another, they would have likely ended up meeting in the peace corps. Fans of the show surely would agree, and know very well that these two were made for one another.

While no one would argue that the twins are seemingly perfect, Nikki and Brie dished on their pet peeves and bad habits for us! Brie shares, “Because I travel so much, my biggest pet peeve is dealing with travelers—the travelers who can’t figure things out.” She adds, “My pet peeve is people who just have no idea how to travel.”

Brie says that while she understands most people don’t travel as much as she does, it can get frustrating when she has to deal with people who never travel and just have no clue, “like what do you mean I have to take my shoes off?” when dealing with standard airport security. Nikki tells us, “Because we travel so much, my pet peeve deals with travel, too. My pet peeve is when it is time to deplane and people don’t wait their turn. It is supposed to go row by row, but people just don’t wait their turn.” While Brie tells us her worst habit is that she bites her nails, Nikki tells us, “I get defensive,” and “I don’t think before I speak.” We forgive you both!

It is no wonder these two have major pet peeves that deal with travel. Their schedule is quite hectic. Nikki and Brie share their hectic schedule with us and tell us the work and dedication it takes to remain the ultimate “Bella Twins.” Nikki explains that the famous duo only have two days at home to fit in workouts, alone time with their men, and running errands. They must travel back and forth weekly as they wrestle Friday through Tuesday, giving them only Wednesday and Thursday at home. So what do they do with the little free time they have? Brie and Nikki love watching Scandal and Revenge, but each has their own favorite as well. Nikki is a Walking Dead fan, while Brie loved watching Charlie Hunnam as Jax on Sons of Anarchy (the series has since ended). At least she’ll have Downton Abbey soon, another one of her favorites.

Both twins have bodies that women from all over the world envy. They are the epitome of health and fitness and their bodies demonstrate that. We asked Nikki and Brie how they stay so fit. While Brie loves Barre classes and pilates, Nikki does more heavy-weightlifting and overhead squats three days a week, and jumps on the elliptical the rest of her week. Nikki describes herself as curvier than Brie and tells us their approach to diet is different. Nikki says, “Brie is more about moderation. Everything in moderation. I do six days with no starch, sugar, and dairy, and then I have one day off and I have whatever I want. It is easy for me because John [Cena] eats this way as well.” She explains that just a few weeks of following this plan results in a major transformation. They are both doing something right, because they consistently look incredibly fit.

With two equally gorgeous, fit, ambitious, intelligent women, we wondered what makes Brie and Nikki different from one another. Nikki tells us that the two actually have a lot more commonalities than differences, “We actually live a lot alike. We like to do the same things, we’re both organized, we both love coffee and wine, sunsets, candles, music, and food. We even tourist the same too.” After a pause she considers a few of their differences, “We decorate our homes differently, and Brie drives like a grandma.” As we all share a laugh, Brie chimes in, “Hey…safety first.” Brie reminds Nikki that she also has a love of Froyo that Brie doesn’t share.

We can’t wait to watch on January 4th and we know you’ll be joining us! Don’t worry if you miss it, because CDL always recaps Total Divas. Don’t forget to tune in to E! on Sunday, January 4th at 10PM. There will be a couple new faces, too, based on the news we’ve heard. Check out E! Online for all the latest Total Divas news and updates. Be sure to follow Nikki and Brie on Twitter, Like them on Facebook, and follow Nikki  and Brie on Instagram.