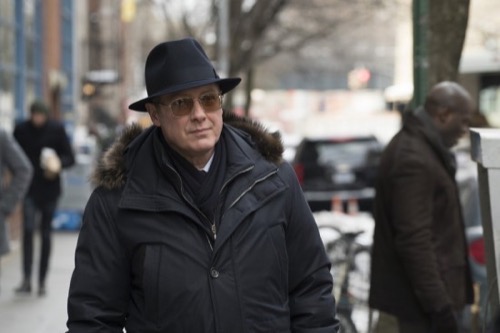 Tonight on NBC their criminal drama, The Blacklist starring James Spader continues with an all new Thursday March 12, season 2 episode 15 called, “The Major,” and we have your weekly recap below. On tonight’s episode, Liz is questioned in court as a murder suspect, with the task force and her odd relationship with Red [James Spader] falling under scrutiny. Elsewhere, the hunt is on for a dangerous former associate who may be able to keep Liz [Megan Boone] out of prison.

On the last episode, Red got entangled in a dangerous game with a wealthy family whose fortune was illegally amassed. Meanwhile, Tom delved into a new mission. Did you watch the last episode? If you missed it, we have a full and detailed recap right here for you.

On tonight’s episode as per the NBC’s synopsis, “when Agent Keen (Megan Boone) is questioned in court as a suspect in the murder of the DC Harbormaster, her unusual relationship with Red (James Spader) and their task force falls under scrutiny. Meanwhile, Red enlists Cooper (Harry Lennix) and Ressler (Diego Klattenhoff) to locate “The Major,” a dangerous former associate who is key in keeping Liz out of prison. Amir Arison, Mozhan Marno and Ryan Eggold also star.”

Tonight’s episode of The Blacklist kicks off with a flashback to New York City in 1994, a kid steals a woman’s purse and begins sprinting down the street. A man pulls up in a Cadillac and the kid jumps in the car to get away from the men chasing him. The old man in the car knows Jake’s name – he has a file on him from social services. The old man tells Jake that he has been watching him, and he thinks he is talented – he says he has an opportunity for Jake. The man tells him that he can “help him become anything.”

Harold calls Elizabeth in to his office – he knows about Eujene Ames, and there is going to be a grand jury trial. Cooper has been subpoenaed to come testify under oath whether or not Liz was really at the docks on FBI business. He demands to know what happened, Liz says it doesn’t matter – she was doing what she had to do to stop Berlin. Cooper has filed a motion to shut down the subpoena, due to the security of their task force. He warns Elizabeth that she better hope he doesn’t have to testify – because he won’t lie for her. They head to court, and the judge is not happy with the “dog and pony show” that the FBI has created around the case. Wilcox stands up in court and rants that Elizabeth is involved in a cover-up. The judge interrupts, he agrees to hear the FBIs argument in his chambers and he will determine whether or not it is a matter of “national security,” to go through with the murder trial.

Elizabeth heads to the judge’s chamber, he swears her in under oath. Meanwhile, Ressler and Reddington meet with Harold. Red says that the next name on the Blacklist is “The Major” – he recruits outcast and delinquent kids and cultivates them in to charming and attractive adults who are capable of dangerous things. Red says that if they find “The Major,” they can clear Elizabeth’s name. Red says that the only way he can get to The Major is if they abduct a deputy minister – the minister knows where The Major is. Harold warns Red that what he is asking for is insane, Red doesn’t want to hear it – he says it is the only way that they can clear Liz’s name. Later the minister is jogging through the park – Ressler and other agents pull up in an SUV and grab him and leave.

Meanwhile in the judge’s chambers, Elizabeth Keen explains to the judge that Reddington is an informant and he is working with them – he was the reason that she was at the docks. The judge demands to know how old Elizabeth is, he doesn’t understand why the FBI would put a 30 year old in charge of Reddington. Elizabeth explains that the FBI didn’t choose her – Reddington did, he sent a helicopter to pick her up on the first day of her job. Elizabeth demands to know why the judge is so interested in Reddington – they were supposed to be there to discuss Eugene Ames’s murder. The judge ignores her and asks about the first time she met REddington, Elizabeth describes the first case she took on with Red and the general’s daughter being kidnapped.

Meanwhile, Tom Keen is in Germany on assignment, he meets with a man in a dark bar. Ressler hands the prime minister over to Reddington – Red tells him that he knows he is a seret agent that was trained by “The Major.” He knows that the prime minister is an asset, and he threatens to tell the Hernandez Cartel who he really is. Red says that he won’t blow his cover if he gives up “The Major.” In the judge’s chamber, he questions Liz about Tom Keen. Liz says it is impossible for Tom to have been at the docks when Ames was killed – because she shot him and killed him four months before Ames was murdered. Liz confesses that her and Tom’s entire relationship was a lie – Tom was a spy, and Berlin ordered Tom to abduct her. Liz explains The Blacklist to the judge – he isn’t buying it, she reassures him that Red “keeps them busy.”

Wilcox heads back in to the interrogation room and tries to reason with Sam, he warns him that Elizabeth is going to pin the murder of Eugene James on him if he doesn’t tell the truth. Sam slips up and says he already “took a bullet for his trouble.” Wilcox orders the police officers to go back to the boat and comb every inch of it to see if there is a stray bullet that their evidence team didn’t find. Meanwhile in Germany Tom pulls up to a car at a red light, he knocks on the window and a man rolls it down. From his bike, Tom shoots the man in the head and then drives away.

In the judge’s chamber Elizabeth swears that Red is not her friend and she is not loyal to him – but he has saved her life. She confesses to the judge that for a while she though that Red could have been her father – he goes on to tell him about his adopted father Sam Mahone. The judge thinks that Elizabeth is lying – if she never met Red, then how did Red know her adopted dad? The judge storms out and says that he is taking a break. Elizabeth begs the judge to finish up his interrogation so that she can go home – but he storms out of his chambers. The prime minister calls “The Major” and calls him for a meeting – it’s a trap, Reddington is waiting for him. With a gun of “The Major” Red announces that he “wants Tom Keen.”

The judge returns to his chamber and begins questioning Liz again – she tries to explain the Folcrom and begins ranting that it could change the entire world. The judge says they have gotten off topic – and begins asking about Eugene’s murder. Elizabeth insists that Tom Keen is dead, the judge says that he is going to question Harold to see if her story adds up.

Reddington is meeting with The Major, he refuses to give up Tom Keen. Red reminds him that he sold him an asset, Tom was originally his spy, but he turned for Berlin. As far as Red is concerned, The Major owes him – and he is not going anywhere until he tells him where Tom is.

Harold heads in to the judges’ chambers – the judge asks Harold if Elizabeth was on the docks for personal reasons or on official FBI business. Harold lies under oath for Elizabeth and swears that she was on the boat for official FBI business. The judge isn’t buying it – he warns Harold that he is under oath, Harold refuses to change his story though. As Harold leaves, the judge promises him that they will be “speaking again soon.”

At the police station a cop comes back form the docks with a bullet they found – Wilcox orders him to test it with Elizabeth’s gun, she checked it in at the front desk of the court house.

Red and Dembe are getting ready to leave to track down Tom with the info they got from The Major. Dembe warns Red that he needs to tell Liz the truth, the whole truth about Tom.

Wilcox rushes in to the judge’s chamber with a report – the bullet that shot Sam was fired from Liz’s gun –now they have proof that Liz lied under oath and tried to cover up Eugene’s murder.