The Bold and the Beautiful (B&B) Spoilers: Father and Son Wild Punch Up Over Hookup – Quinn Calls Liam ‘Spineless Lapdog’ 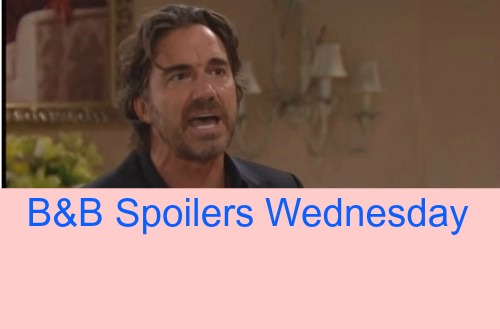 “The Bold and the Beautiful” spoilers for Wednesday, September 30, tease that Quinn (Rena Sofer) will tell Liam (Scott Clifton) exactly what she thinks of him. Quinn will suggest that Liam is a man that can’t say no to anything. That’s especially true if someone needs to be rescued. Bill (Don Diamont) recently implied that Liam was the smarter Spencer brother, but Quinn completely disagrees.

According to Quinn, Liam is a spineless lapdog. Wyatt (Darin Brooks) is the one who’s standing up for Ivy (Ashleigh Brewer) and trying to make a name for himself in the fashion world. Meanwhile, Liam continues to have everything handed to him by Bill.

It’s clear that Quinn is on the warpath, but Deacon (Sean Kanan) will try to calm his wife down. Deacon has been a great influence on Quinn since they first got together, but that doesn’t mean Quinn’s problems are solved. Quinn was, is and always will be a little crazy. Fortunately, Quinn’s wild streak could actually benefit Wyatt and Ivy. Perhaps Quinn will come up with a plan that’s just crazy enough to work.

Of course, Liam will believe Quinn can’t be trusted. However, Ivy will point out that Liam is no more trustworthy than Quinn. Quinn may have shoved Ivy off a bridge, but Liam threw her under the bus. In the end, Ivy will have to get better instead of bitter if she hopes to get revenge. With Wyatt and Quinn in her corner, Ivy has a very good shot at retribution. “The Bold and the Beautiful” rumors hint that they may put a plot in action soon.

Elsewhere, Ridge (Thorsten Kaye) will have something to say about Thomas’ (Pierson Fode) choice in romantic partners. B&B spoilers reveal that Ridge will rip into Thomas for hooking up with an intern. Thomas will probably argue that Ridge should butt out of his love life. Nevertheless, Ridge is the CEO of Forrester Creations and he undoubtedly wants Thomas to steer clear of women in the workplace.

It’s obvious that Ridge and Caroline have some underlying issues thanks to their shared love for Caroline (Linsey Godfrey). Look for that drama to come bubbling up as a brawl breaks out between this father and son. Stick with “The Bold and the Beautiful” for updates on how this fight will be resolved.

So B&B fans, what do you think about the news that Quinn will be brutally honest with Liam? Who’s truly the smarter Spencer: Liam or Wyatt? Should Ivy trust Quinn? Is Thomas wrong for mixing business with pleasure? Let us know what you think in the comments below and don’t forget to check CDL often for the latest “Bold and the Beautiful” spoilers, rumors, updates and news.

The Bold and the Beautiful Video Preview for Wednesday, September 30