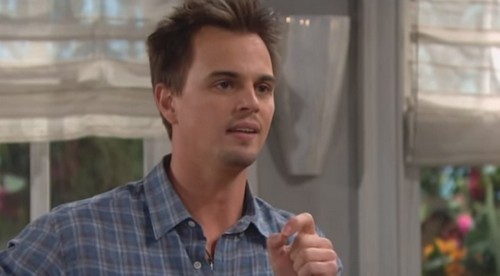 “The Bold and the Beautiful” spoilers for Tuesday, September 15, tease that Thomas (Pierson Fode) will try to explain his actions. Thomas was feeling a little blue after Ridge (Thorsten Kaye) and Caroline (Linsey Godfrey) announced their impromptu wedding plans. When Nicole (Reign Edwards) tried to get Thomas to open up, he pulled her close for a passionate kiss. Nicole was stunned by Thomas’ unexpected move and now he’ll have to apologize for being so impulsive.

It looks like Thomas is feeling lonely and rejected. When a beautiful girl was in front of him, he just couldn’t resist stealing a smooch. It’s doubtful that their kiss really meant anything, but it will surely mean something to Zende (Rome Flynn). B&B rumors hint that Zende will be quite jealous once he learns someone else has been getting close to his crush. Fortunately, Zende will soon decide to move his relationship with Nicole forward by formally asking her out on a date.

Meanwhile, Liam (Scott Clifton) will grow concerned about Wyatt’s (Darin Brooks) ominous comment. After Steffy (Jacqueline MacInnes Wood) fired Ivy (Ashleigh Brewer), Wyatt made it clear that she’d be sorry for what she did. The same goes for Liam’s decision to back up his girlfriend. “The Bold and the Beautiful” spoilers indicate that Liam will wonder what Wyatt meant when he said they’d regret their decision. Steffy seems to believe she’s putting her issues with Ivy to rest by firing her. However, Steffy could inadvertently be starting another bitter battle.

“The Bold and the Beautiful” spoilers reveal that Wyatt will say he wants to carve out his own space in his family’s business. It appears Wyatt wants Bill (Don Diamont) to help him make a name for himself and give the Spencers a boost over the Forresters. Steffy needs to watch her back. Wyatt will be on a mission for revenge and he won’t hesitate to deliver some low blows. And with Wyatt always comes Quinn (Rena Sofer)! Liam may want to think twice about staying in Steffy’s corner. Who will be left standing once Wyatt sparks a cutthroat war? Stick with the CBS soap for updates on the conflict that lies ahead.

So B&B fans, what do you think about the news that Thomas will apologize to Nicole for his kiss? Will Wyatt make Steffy pay for what she did to Ivy? How will Wyatt try to take Steffy down? Let us know what you think in the comments below and don’t forget to check CDL often for the latest “Bold and the Beautiful” spoilers, rumors, updates and news.

The Bold and the Beautiful Video Preview for Tuesday, September 15