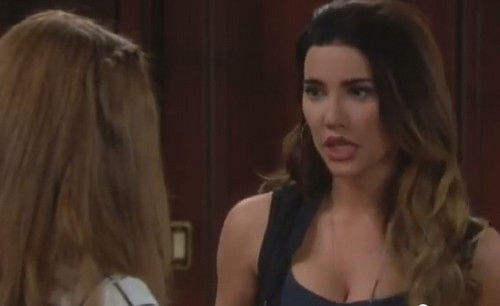 The Bold and The Beautiful spoilers and rumors are hinting that there is trouble ahead for the Spencer family. Jealousy is about to rear its ugly head between Liam (Scott Clifton) and his brother Wyatt Spencer (Darin Brooks). Fans who have watched The Bold and the Beautiful know that ever since Wyatt has come to town and discovered that he was the son of Bill Spencer (Don Diamont), and Liam’s half-brother the two have had a rivalry that has been less than friendly and definitely not brotherly. Wyatt had been a major thorn in Liam’s side from day one insinuating himself into Liam’s life by moving into his house, and relationship with Hope Logan (Kim Matula) which eventually culminated in a marriage and pregnancy for Hope and Wyatt then a miscarriage and divorce for the B&B couple.

Now The Bold and the Beautiful rumors indicate the rivalry is about to spark up all over again. This time it centers on the takeover at Forrester Creations. Wyatt is feeling left out and angry because he did all the legwork to get Maya’s (Karla Mosely) transgender secret out of Nicole (Regin Edwards) and now he is left sitting outside while Bill and Liam are in the boardroom making all of the decisions. According to The Bold and The Beautiful spoilers this jealousy is going to cause some major issues between the two brothers as once again Wyatt goes after a woman that Liam has a history with. This time the woman will be Liam’s ex-wife Steffy Forrester (Jacqueline Macinnes Wood).

Spoilers on the Internet say that Wyatt will pursue Steffy out of spite for Liam in the beginning, but then real feelings will develop between them and they will become a bona fide couple. Spoilers indicate that even though Liam has been dating his girlfriend Ivy Forrester (Ashleigh Brewer) for quite a while he will still be very angry when he finds out that his brother is pursuing his ex-wife.

The Bold and the Beautiful spoilers indicate that there will be an unexpected player in this drama between the two brothers. Nicole Avant (Regin Edwards) will also have something to say about this budding relationship between Wyatt and Steffy. Fans know that Wyatt and Nicole dated briefly until Wyatt betrayed by telling Maya’s (Karla Mosely) secret to Liam and his father Bill Spencer and the news ended up spread on every magazine cover in Los Angeles. Wyatt and Nicole broke up shortly after the release of the article

However Nicole still cares for Wyatt and wants to be with him. Seeing him with Steffy will surely upset her and make her jealous because of those feelings. The question is how will she respond? The Bold and the Beautiful fans know that Nicole is no slouch when it comes to getting what she wants. She is not above using whatever means are available, including blackmail.

How will Liam respond to this budding relationship between his brother and his ex-wife? Will he risk hurting Ivy to keep Wyatt and Steffy apart? What about Nicole? How will she respond to the new couple? Will her jealousy put one or both of them at risk?

Stay tuned to CBS’ The Bold and the Beautiful. Come back to CDL for more B&B rumors, spoilers and updates. Please leave your thoughts and comments in the comments section below.

Enjoy The Bold and the Beautiful video preview promo for June 5, 2105 – watch it below!