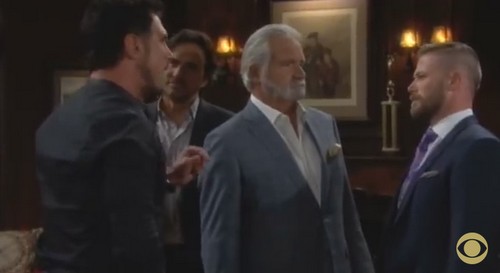 “The Bold and the Beautiful” spoilers for Thursday, June 4, tease that Wyatt (Darin Brooks) will express his outrage over Bill’s (Don Diamont) preferential treatment of Liam (Scott Clifton). Wyatt will argue that Bill rewards Liam whether he’s earned it or not. It’s clear that Bill is proud of Liam and he does tend to favor him most of the time. It’s really not a surprise that Wyatt feels like Bill is playing favorites. Quinn (Rena Sofer) will soon confront Bill about how Wyatt has been treated, but it’s doubtful that Bill is going to change his ways. Bill will probably just tell Wyatt to suck it up and get over it.

Meanwhile, Maya (Karla Mosley) will give Nick (Scott Turner Schofield) some updates on everything that’s happened with Rick (Jacob Young). Maya will admit that she made a mistake by not telling Rick sooner. Rick came around very quickly when he learned that Maya was transgender, but he flipped out when he learned that so many other people already knew the truth. Rick has been insisting that he loves Maya and they can put the past behind them. However, Maya remains concerned about what will happen if Rick’s career takes a nosedive.

“The Bold and the Beautiful” spoilers reveal Nick will remind Maya that every situation is unique. It was up to Maya to determine how and when her story would be told. However, Maya will likely still feel guilty about keeping Rick in the dark. If Maya had been upfront about her past, she wouldn’t be in this mess right now.

Of course, Rick has much more on his mind than the lingering scandal. Bill holds the future of Forrester Creations in his hands and he’s about to deliver a major decision. Ridge (Thorsten Kaye) isn’t happy that Bill is considering Rick and Eric’s (John McCook) proposal, but there may be a way to resolve the problem. Bill will offer Ridge an alternative solution that could point the company in a different direction. B&B rumors say that some surprises are in store at Forrester Creations. Stay tuned to “The Bold and the Beautiful” to see who will get the better end of the deal.

So B&B fans, what do you think about the news that Wyatt will say Bill gives Liam preferential treatment? Is Liam really the golden boy? Was Maya wrong to keep her secret from Rick for so long? What should Bill do about the feud between Rick and Ridge? Let us know what you think in the comments below and don’t forget to check CDL tomorrow for the latest “Bold and the Beautiful” spoilers, rumors, updates and news.

Enjoy The Bold and the Beautiful video sneak peek below for June 4, 2015!