‘The Bold and the Beautiful’ Spoilers: Wyatt and Steffy Hookup – Bill Betrays Partners, Sells Out To Eric and Rick

BY Heather Hughes on May 30, 2015 | Comments: 13 comments
Related : Soap Opera, Spoiler, Television, The Bold and the Beautiful 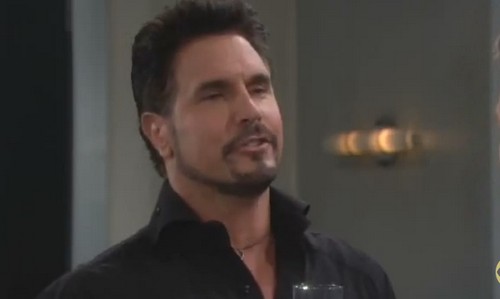 “The Bold and the Beautiful” spoilers for the week of June 1-5 reveal that big drama is about to go down at Forrester Creations. On Monday, Eric (John McCook) and Rick (Jacob Young) will be shocked to discover that Ridge (Thorsten Kaye) is trying to stab them in the back. Rick will have to form a new strategy to stop the takeover, but first he’ll have some personal issues to work through. It seems Rick will have a chance to let Maya (Karla Mosley) know where he stands on their relationship. Perhaps Rick will try to convince Maya that he’s accepted the fact that she’s transgender and it doesn’t change his mind about being with her. Nevertheless, Maya will likely urge Rick to take more time to think about what he truly wants.

On Tuesday’s episode, Eric and Rick will come up with a way to counter Ridge’s latest move. Eric will reach out to Bill (Don Diamont) in hopes that he’ll agree to help. Bill wants to bring Rick down almost as much as Ridge, but let’s face it: Bill will do anything for a price. It looks like Eric will make it worth his while and Bill may temporarily join the dark side. Ivy (Ashleigh Brewer) will also make it clear to Steffy (Jacqueline MacInnes Wood) that Liam (Scott Clifton) is off limits.

“The Bold and the Beautiful” spoilers for Wednesday tease that the tension will finally come to a head as Rick, Bill, Eric and Ridge get into a huge brawl. B&B viewers can expect to see tempers flare and punches fly. Meanwhile, Ivy and Steffy will continue their argument and they’ll force Liam to pick sides. It sounds like Liam will have to choose his words carefully to keep these crazy women at bay.

On Thursday, Maya’s future will hang in the balance as she waits for Rick to make up his mind about staying together. Fortunately, Maya may not have too much to worry about. The rumors say the future looks bright for Rick and Maya’s relationship. However, Ivy won’t be as certain about her future with Liam. As Steffy grows closer to her ex, Ivy will try to distract her by bringing Wyatt (Darin Brooks) into the mix. On Friday’s episode, Ivy will urge Wyatt to ask Steffy on a date. Wyatt is still a little down in the dumps after his confrontation with Nicole (Reign Edwards), but he might be willing to rebound with Steffy. Stick with “The Bold and the Beautiful” to see if Wyatt will decide to take Ivy’s advice.

So B&B fans, what do you think about the news that a major fight will break out at Forrester Creations? Will Ridge succeed in making some updates to the leadership role at the company? What about Rick and Maya’s relationship woes? Will they work things out? Could Wyatt prove useful as a distraction for Steffy? Let us know what you think in the comments below and don’t forget to check CDL tomorrow for the latest “Bold and the Beautiful” spoilers, rumors, updates and news.