‘The Bold and the Beautiful’ Spoilers: Ridge Quits Forrester Creations, Rick Prepares To Propose To Maya

BY Amanda Austin on April 24, 2015 | Comments: one comment
Related : Soap Opera, Spoiler, Television, The Bold and the Beautiful 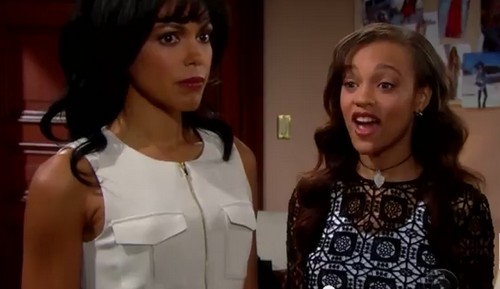 “The Bold and the Beautiful” spoilers for the week of April 27-May 1 reveal B&B fans are in for some exciting drama at Forrester Creations, according to B&B rumors you will not want to miss a single episode. “Bold and the Beautiful” spoilers tease that the Forrester brothers will continue to feud over control of their family company and Ridge will threaten to resign and leave Forrester Creations altogether. Brooke (Katherine Kelly Lang) and Eric (John McCook) will make a desperate plea to Ridge (Thorsten Kaye) to stay at the company and he gives them an ultimatum – either Eric gives Rick his walking papers, or else Ridge is walking out.

“Bold and the Beautiful” spoilers reveal that while the Forresters are fighting over control of their family company – Bill Spencer and his sons will continue to scheme their own takeover of Forrester Creations. During the week of April 27 Bill orders his sons Liam (Scott Clifton) and Wyatt (Darin Brooks) to continue searching for the secret Maya (Karla Mosely) is harboring that will take down Rick (Jacob Young). According to “Bold and the Beautiful” spoilers Wyatt takes his father’s orders to heart and continues to woo Maya’s little sister, who is falling for Wyatt hook, line, and sinker.

During the week of April 27-May 1 spoilers also reveal that fans of the CBS soap can expect to see Rick preparing to pop the question and ask Maya to marry him – completely unaware of the fact that Maya used to be a man named Myron. Meanwhile, at Forrester Creations, Pam and Charlie put on their detective hats and discover the secret that the Spencer Brothers have been searching for – they decide to keep the revelation to themselves for fear of losing their jobs. Could the secret be that Forrester’s bottom line has been grossly inflated and that company is not doing nearly as well as Eric believes?

So B&B fans, do you think that Rick and Maya will actually get married before he learns her secret, when he knows about Myron will he change his mind? What do you think of Wyatt and Nicole (Reign Edwards) getting together? Will Ridge really quit his job at Forrester Creations? Let us know what you think in the comments below and don’t forget to check CDL tomorrow for more “Bold and the Beautiful” spoilers and news.