‘The Bold and the Beautiful’ Spoilers: Eric Praises Rick for Success, Scandal Coming – Liam Urges Wyatt to Focus on Rick 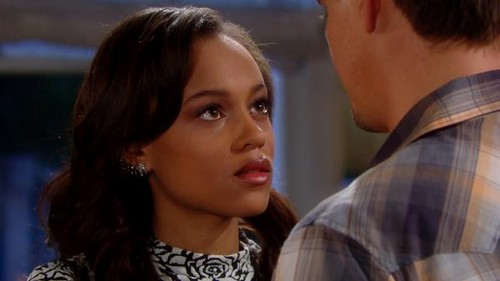 “The Bold and the Beautiful” spoilers for Thursday, April 23, tease that Liam (Scott Clifton) will urge Wyatt (Darin Brooks) to remember their ultimate goal. When Wyatt found out that Rick (Jacob Young) and Maya (Karla Mosley) might have something to hide, he jumped at the chance to squeeze some secrets out of Nicole (Reign Edwards). Now that the scheme is underway, Liam fears that Wyatt is getting sidetracked by his emotions. Wyatt certainly appears to be interested in Nicole and he even stole a kiss in the heat of the moment. Liam just wants to make sure Wyatt isn’t blurring the line between business and pleasure. The rumors say Wyatt will indeed fall for Nicole and it’ll make his plan a lot more complicated. Stay tuned to B&B to see when Wyatt will admit that he’s crushing hard.

Meanwhile, Eric (John McCook) will praise Rick for the great work he’s been doing at Forrester Creations. Rick has treated his employees terribly since he took over as CEO, but the company’s sales numbers have been fantastic. As if Rick didn’t gloat enough, Eric will egg him on by gushing about all the recent success. Of course, Rick will be more than willing to take the credit, but there’s a good chance he’ll point to Maya as his inspiration. With Maya by his side, Rick plans to be CEO for many years to come. Unfortunately for Rick, a major scandal could be brewing.

“The Bold and the Beautiful” spoilers hint that Rick will say he’s thinking about proposing to Maya. Rick’s divorce isn’t even finalized and he’s already trying to marry someone else. To make matters worse, Maya is keeping a secret that could completely shatter Rick’s perfect career and personal life. When the news gets out that Maya used to be a man, it could lead to a media frenzy that will force Rick to step down. Maya claims she’ll tell Rick about her sex change when he pops the question, but it might be the biggest risk of her life. Will Rick accept Maya for who she is or reject her for all the lies? Stick with “The Bold and the Beautiful” to see what Rick will decide.

So B&B fans, what do you think about Liam’s advice for Wyatt? Will Wyatt’s feelings get in the way of his plan? What about Eric’s approval of Rick? Do you think a scandal is on its way? Will there be major updates at Forrester Creations when Maya’s secret is exposed? Let us know what you think in the comments below and don’t forget to check CDL tomorrow for the latest “Bold and the Beautiful” spoilers, rumors, updates and news.