‘The Bold and the Beautiful’ Spoilers: Caroline and Ridge Go Public, Bill and Katie Get Married, Eric Forrester Returns

BY Amanda Austin on February 16, 2015 | Comments: one comment
Related : Soap Opera, Spoiler, Television, The Bold and the Beautiful 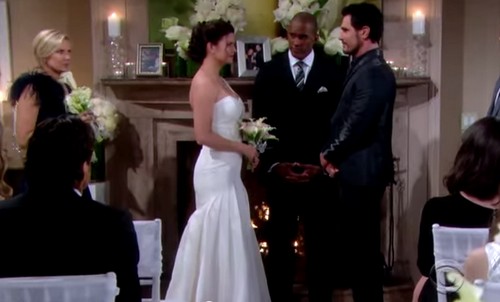 “The Bold and the Beautiful” spoilers for February 16-20 tease another week of exciting drama at Forrester Creations, and rumor has it B&B fans will not want to miss a single episode. The power struggle of the Forrester Family company continues, and Bill and Katie Spencer’s wedding plans are underway. According to “Bold and the Beautiful” spoilers, this is what fans can expect to see on the CBS soap during the week of February 16.

Monday February 16: “Bold and the Beautiful” spoilers tease that on Monday February 16 news spreads of Bill and Katie Spencer’s wedding, and naturally everyone has an opinion. Brooke’s sister Donna is concerned that Brooke might still have feelings for her old flame Bill, and Katie (Heather Tom) gets the same vibe when she asks her sister for a favor. Meanwhile, Rick Forrester (Jacob Young) makes a complete mockery of the couple’s second wedding.

Tuesday February 17: On Tuesday’s episode of the CBS soap B&B fans can expect to see Bill and Katie’s wedding festivities kick off, and Brooke has to hit the bottle extra hard to cope with her mixed feelings about the joyous day, however she receives support from an unexpected friend. Caroline (Linsey Godfrey) and Ridge (Thorsten Kaye) take advantage of Bill’s wedding to step out on their first official public appearance as a new couple – and it does not go over will.

Wednesday February 18: “Bold and the Beautiful” spoilers tease that on February 18th is Bill (Don Diamont) and Katie’s big day – and their friends and families gather for the nuptials. Also, Quinn Fuller (Rena Sofer) becomes more concerned about Deacon (Sean Kanan) and Brooke’s blossoming relationship – and decides that Deacon needs to put some distance between himself and his troubled baby-mama.

Thursday February 19: According to B&B spoilers, on Thursday’s episode of the CBS soap Rick Forrester will fret over his father Eric’s return to Forrester Creations. Meanwhile over at Spencer Publications, Steffy Forrester (Jacqueline MacInnes Wood) does her best to seduce Liam and win him back.

Friday February 20: Spoilers reveal that on Friday’s episode of “Bold and the Beautiful,” Eric Forrester returns and makes a shocking announcement about the future of their family’s company. Rumor has it that Brooke may attempt to rekindle an old relationship with Eric, seeing as how she is not adjusting well to the single life. And, Ivy puts the breaks on Liam’s plan to take over Forrester Creations and informs him that she is not okay with his plan to steal her family’s company.

So B&B fans, do you think Bill and Katie’s marriage will last this time? Or is it only a matter of time before Brooke interrupts it? Should Quinn be worried about Deacon and Brooke (Katherine Kelly Lang)? Will Eric take back control of Forrester Creations and kick Rick to the curb? Let us know what you think in the comments below and don’t forget to check CDL tomorrow for more “Bold and the Beautiful” spoilers and news.